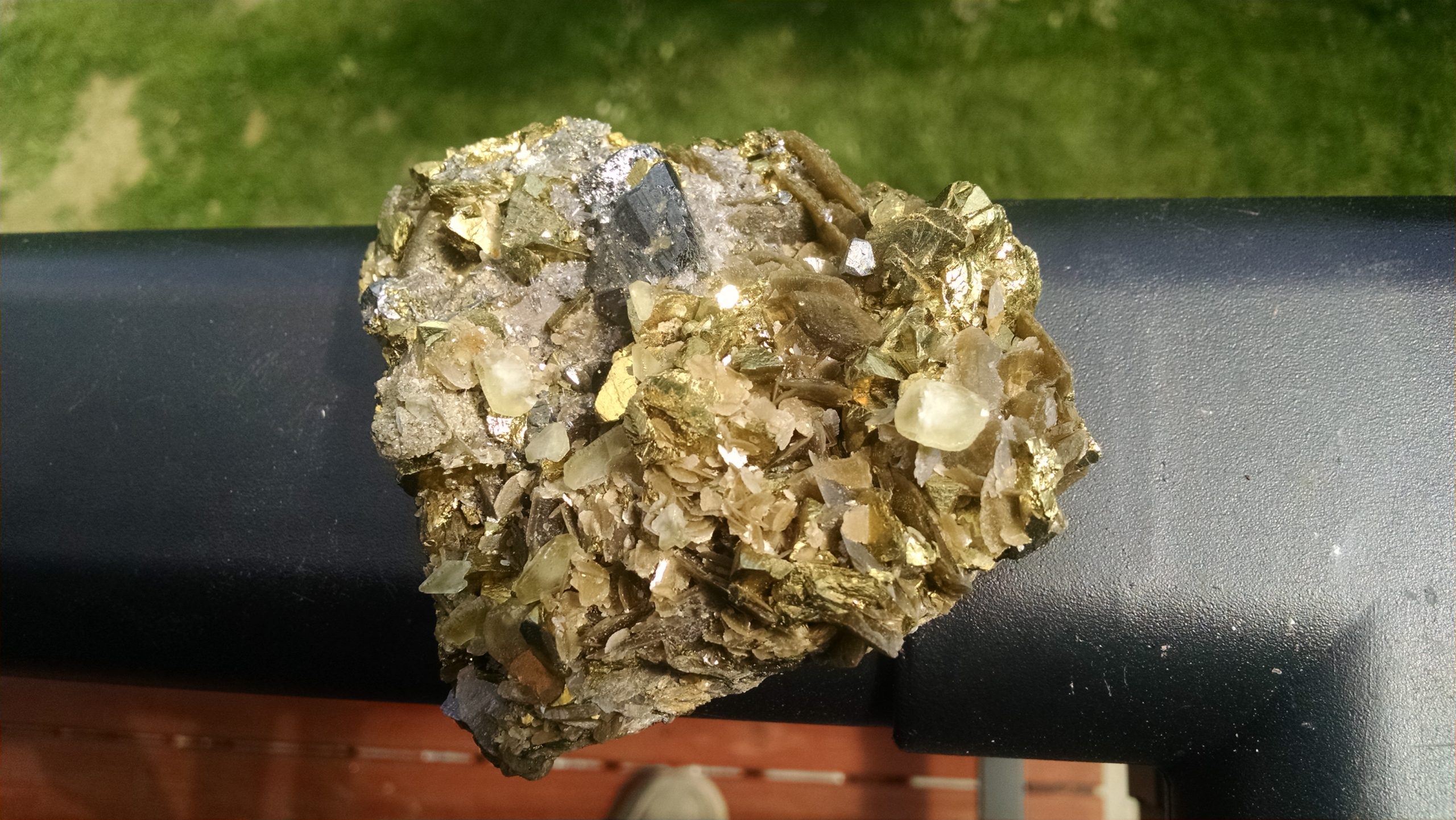 Chalcopyrite is a copper iron sulfide mineral that crystallizes in the tetragonal system. It has the chemical formula CuFeS2. It has a brassy to golden yellow color and a hardness of 3.5 to 4 on the Mohs scale. Its streak is diagnostic as green tinged black.

On exposure to air, chalcopyrite oxidizes to a variety of oxides, hydroxides, and sulfates. Associated copper minerals include the sulfides bornite (Cu5FeS4), chalcocite (Cu2S), covellite (CuS), digenite (Cu9S5); carbonates such as malachite and azurite, and rarely oxides such as cuprite (Cu2O). Chalcopyrite is rarely found in association with native copper.

Chalcopyrite has a golden yellow color, which often resembles Gold. However, its physical properties such as streak and tenacity are very different from Gold and can easily distinguish it.

“Peacock Ore” which is sold to many amateur mineral collectors often as a variety of Bornite, is in fact almost always Chalcopyrite treated with acid to produce an iridescent tarnish. Though some Chalcopyrite is naturally iridescent, wild colors such as strong blues and purples are usually formed from acid treatment.

Crystal Forms: Crystals resemble tetrahedrons and octahedrons, but they are slightly asymmetrical and therefore are categorized in the tetragonal system. Also occurs massive, grainy, reniform, and as groups of small, distorted crystals. Crystals are commonly striated in different directions on different crystal faces.

Environment: In the sulfide zones of copper deposits, in hypothermal veins and mesothermal veins, hydrothermal replacement deposits, metamorphic schists, and in igneous intrusions and dikes.

Localities: Chalcopyrite is a fairly common mineral. Large, well-shaped crystals occur in numerous places in Cornwall, England, especially at the Carn Brea area. Baia Sprie (Felsobanya) and Kapnick both in Maramures Co., are famous Romanian occurrences. Very large crystals come from Krushev Dol, in the Rhodope Mountains of Bulgaria. In the Dreislar Mine, North Rhine-Westphalia, Germany, small Chalcopyrite crystals on white coxcomb Barite occur as an excellent combination with beautiful contrast. In China, large crystals occur at the Yaogangxian Mine, Hunan Province. Many fine Chalcopyrite crystals occur in Zacatecas Mexico; Concepción del Oro and San Martín are noteworthy. The Huaron Mine in Cerro del Pasco, Peru is also a classic locality.