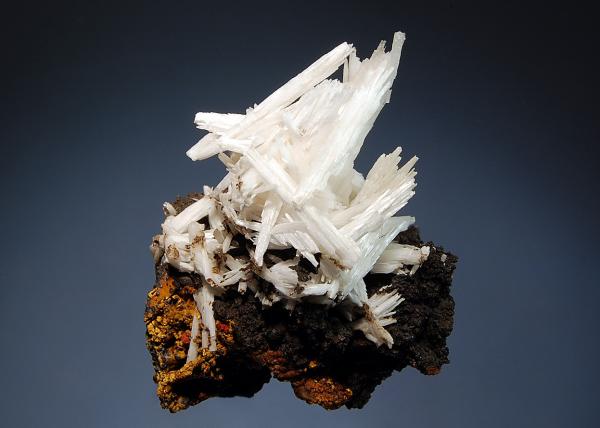 Cerrusite – fluorescence and snowflakes from lead!

Cerussite crystallizes in the orthorhombic system and is isomorphous with aragonite. Cerussite forms some of the most interesting, complex, and varied crystals and groupings in the mineral kingdom. Its most prevalent form is as small, flat, thin plates, as well as prismatic and tabular crystals. Crystals frequently twin to form interesting shapes, such as star, heart, sixlings, and v-shaped twins. An oddity is reticulated growths of thin crystals that form a delicate, snowflake-like mass. Crystal faces are usually striated. Compound crystals appear to be pseudo-hexagonal in form. Three crystals are usually twinned together on two faces of the prism, producing six-rayed stellate groups with the individual crystals intercrossing at angles of nearly 60°. Also occurs massive, fibrous, reticulated, acicular, radiating, coxcomb, and in wheat sheaf form. A common form is encrustations, of groups of small, fragile needles. The mineral is usually colorless or white, sometimes brown, light yellow, gray, or greenish in tint and varies from transparent to translucent with greasy to adamantine luster. It is very brittle and has a conchoidal fracture. It has a Mohs hardness of 3 to 3.75 and a specific gravity of 6.5.

Cerussite is an ore of lead. It is also a popular mineral among collectors, especially when it forms attractive twinned crystals. Cerussite from certain locations is rich in silver thus may be used as a minor silver ore. Cerussite was once used as a white pigment. It is occasionally faceted into gems for collectors.

Localities: Large single Cerussite crystals, as well as v-shaped twins and intergrown “snowflakes“, were found at Tsumeb, Namibia, which is perhaps the most classic locality for this mineral. Fine crystals have also been abundant in Morocco at Mibladen and Touissit. In Australia, excellent Cerussite specimens have come from Broken Hill, New South Wales, and the Rum Jungle, Batchelor, Northern Territory. Many fine crystals have come from Motevecchio and Monteponi, Sardinia, Italy; Weardale, North Pennines, Durham, England; the Pentire Glaze Mine, St Minver, Cornwall, England; and the Nakhlak Mine in Esfahan Province, Iran.

In the United States, large, single crystals occur in the Organ Mountains of Dona Ana Co. and in the Magdalena District, Socorro Co., New Mexico. In Idaho it has been found at the Kellogg and Monarch Mines, Coeur d’Alene, Shoshone Co. Fine specimens come from numerous Arizona localities, particularly the Tiger Mine, Globe, Gila Co.;  the 79 Mine in Hayden, Gila Co.; the Mammoth-St. Anthony Mine in Tiger, Pinal Co.; and in Bisbee, Cochise Co. Fragile white crystals, usually elongated, occur in the Flux Mine in Patagonia, Santa Cruz Co., Arizona. Cerussite was once found in the Wheatley Mines of Phoenixville, Chester Co., Pennsylvania.