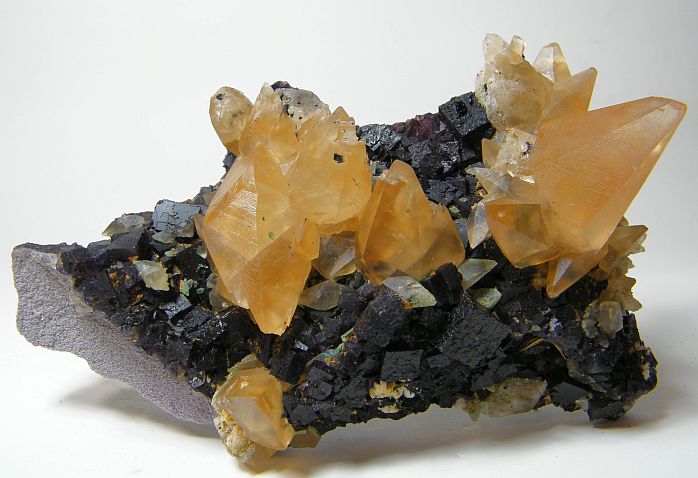 Calcite – The mineral with the most Forms!

Calcite [CaCO3] is a carbonate mineral and the most stable polymorph of calcium carbonate. The other polymorphs are the minerals aragonite and vaterite. Calcite occurs in a seemingly unlimited variety of shapes and colors. It constitutes a major portion of many of the earth’s rocks. Calcite belongs to the calcite group of minerals, a group of related carbonates that are isomorphous with one another. They are similar in many physical properties, and may partially or fully replace one another, forming a solid solution series. All members of the calcite group crystallize in the trigonal system, have perfect rhombohedral cleavage, and exhibit strong double refraction in transparent rhombohedrons.

Calcite crystals are trigonal-rhombohedral. More than 600 forms have been documented for calcite. The five basic forms are Pinacoid, Prism, Rhombohedron, Scalenohedron, and Dipyramid. Crystals may be tabular, acicular, prismatic, flaky, and needle-like. May occur as bundles of scalenohedrons, intergrown rhombohedrons, hair-like masses of acicular crystals, grainy, stalactitic, fibrous, massive, and earthy. There are four twin laws for calcite. Scalenohedral twinning is common. Cleavage is usually in three directions parallel to the rhombohedron form. Its fracture is conchoidal, but difficult to obtain.

It has a defining Mohs hardness of 3, a specific gravity of 2.71, and its luster is vitreous in crystallized varieties. Color is white or none, though shades of gray, red, orange, pink, yellow, green, blue, violet, brown, or even black can occur when the mineral is charged with impurities (iron, magnesium, or manganese, and occasionally zinc and cobalt).

Calcite, like most carbonates, will dissolve with most forms of acid. Calcite can be either dissolved or precipitated by groundwater, depending on several factors including the water temperature, pH, and dissolved ion concentrations.

Calcite is a common constituent of sedimentary rocks, limestone in particular, much of which is formed from the shells of dead marine organisms. Approximately 10% of sedimentary rock is limestone. Calcite is the primary mineral in metamorphic marble. It also occurs as a vein mineral in deposits from hot springs, and it occurs in caverns as stalactites and stalagmites. Calcite may also be found in volcanic or mantle-derived rocks such as carbonatites, kimberlites, or rarely in peridotites.

Calcite is often the primary constituent of the shells of marine organisms, e.g., plankton (such as coccoliths and planktic foraminifera), the hard parts of red algae, some sponges, brachiopods, echinoderms, some serpulids, most bryozoa, and parts of the shells of some bivalves (such as oysters and rudists). Calcite is found in spectacular form in the Snowy River Cave of New Mexico as mentioned above, where microorganisms are credited with natural formations. Trilobites, which became extinct a quarter billion years ago, had unique compound eyes that used clear calcite crystals to form the lenses.

Calcite seas existed in Earth history when the primary inorganic precipitate of calcium carbonate in marine waters was low-magnesium calcite, as opposed to the aragonite and high-magnesium calcite precipitated today. Calcite seas alternated with aragonite seas over the Phanerozoic, being most prominent in the Ordovician and Jurassic. Lineages evolved to use whichever morph of calcium carbonate was favorable in the ocean at the time they became mineralized and retained this mineralogy for the remainder of their evolutionary history. Petrographic evidence for these calcite sea conditions consists of calcitic ooids, LMC cement, hardgrounds, and rapid early seafloor aragonite dissolution. The evolution of marine organisms with calcium carbonate shells may have been affected by the calcite and aragonite sea cycle.

There are literally thousands of excellent Calcite localities. The original Iceland Spar variety was described from an old mine in Iceland called the Helgustadir Mine which was known since the 1600s. Two classic European localities are St. Andreasberg, Harz Mts, Germany and Pribram, Bohemia, Czech Republic. Currently, most Iceland Spar on the market comes from Chihuahua, Mexico.