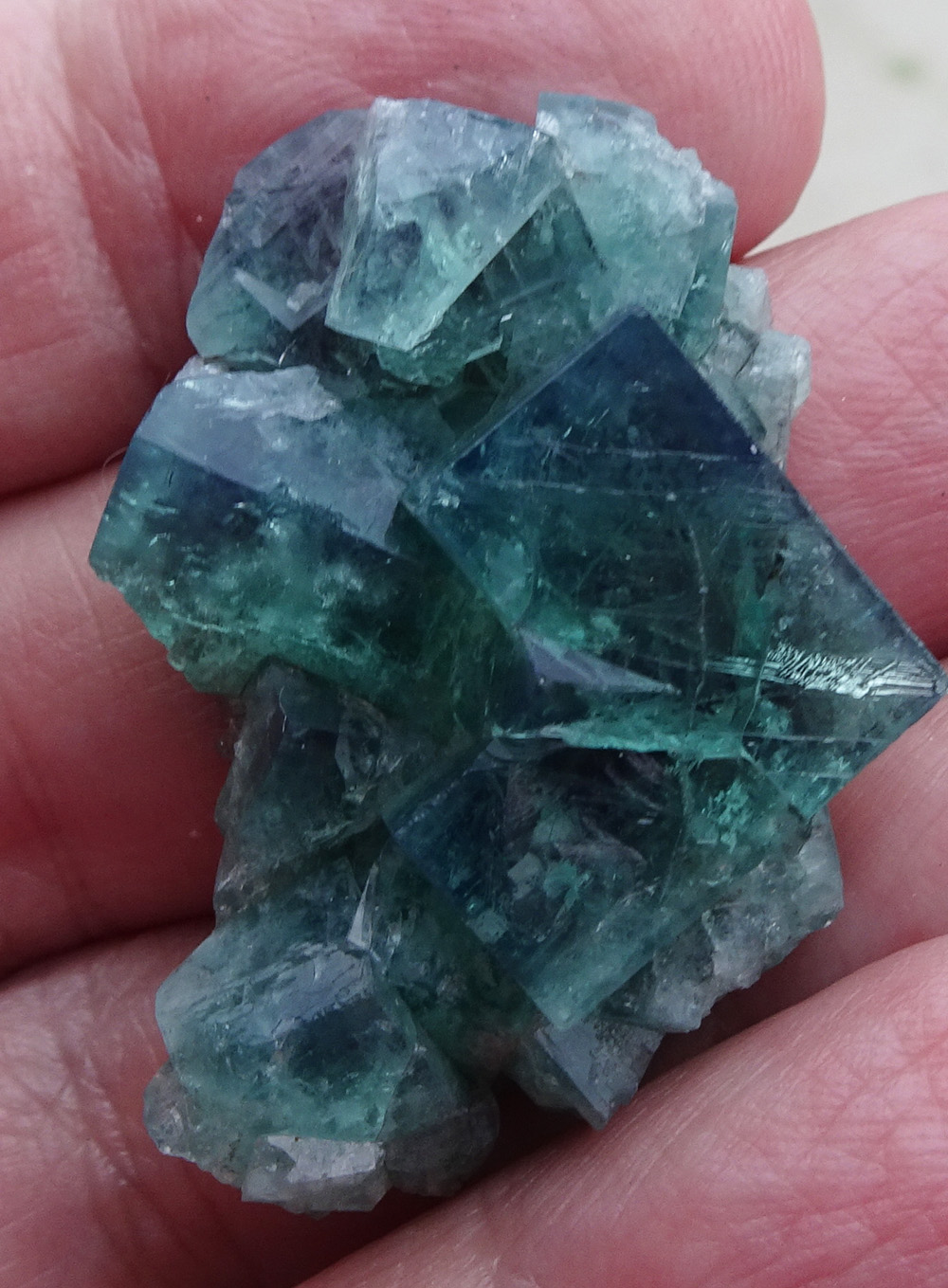 Fluorite is a calcium fluoride (CaF2) mineral. Fluorite is a favorite of mineral collectors for its many colors, crystal shapes, and fluorescence. It is a member of the Isometric Crystal System. Crystal shapes are usually cubes, some octahedrons, and rarely dodecahedrons. Other habits are botryoidal, nodular, columnar, fibrous, granular, or massive. Twinning is common in Fluorite, usually under the spinel twin law. Contact twins and penetration twins are common. Hardness is a 4 on the Mohs Scale. Luster is vitreous to glassy. Streak is always white regardless of the color of the Fluorite.

Color: Fluorite is a very colorful mineral. The most common colors are purple, blue, green, yellow, or colorless. Less common are pink, red, white, brown, and black. Color zoning is also common. Pure fluorite, consisting only of calcium and fluorine, is colorless and transparent. The causes of color in fluorite are generally accepted to be from impurities in fluorite and exposure to natural radiation. Trace amounts of silicon, aluminum, magnesium, as well as rare-earth elements of strontium, yttrium, cerium, uranium, europium, erbium, or samarium will affect the color (and fluorescence).

Fluorescence: The phenomenon of fluorescence derives its name from Fluorite. Fluorite can fluoresce in almost in color but is most common as blue (under long-wave ultraviolet light). The various trace elements that substitute for calcium in the crystal structure can serve as activators of fluorescence. For diversity of fluorescence, the only other minerals that rank with fluorite are calcite, sphalerite, fluorapatite, and diamond. Certain Fluorite will exhibit phosphorescence after UV light has been removed. A variety of Fluorite called Chlorophane will exhibit blue-green thermoluminescence in that blue-green light is emitted upon heating the mineral.

Uses: Fluorite is long been used as a flux in the smelting process in the production of steel and aluminum. Fluorite is used to produce weapons-grade uranium and in many fluorine-based chemicals found in products such as Teflon, herbicides, toothpaste, and hydrofluoric acid.

Locations: England has produced some of the finest fluorite specimens, especially in Weardale, North Pennines, Co. Durham. Green cubic crystals have come from the famous Rogerly Mine in Weardale, and these uniquely exhibit daylight fluorescence, changing to a saturated blue color in sunlight. Other English occurrences in the North Pennines region are Nenthead (Alston Moor District); the Hilton Mine, Scordale; and East Allendale (Allenheads Mine and St. Peters Mine).

Bright blue Fluorite crystals are known from several areas in France. Three well-known localities are Le Burg (Le Burc) and Mont-Roc, both in Tarn, and Le Beix, in Puy-de-Dome. Pink octahedrons, highly valued by collectors, were found in the Alps near the Argentiere Glacier, Mont Blanc, Chamonix, France; and at Göscheneralp, Uri, Switzerland. Fine crystals are also found in Spain in Caravia, Asturias, especially in the Berbes, La Collada, and Villabona areas. In Germany, fine Fluorite has come from the Erzgebirge in Saxony at Frohnau and the Freiberg District.

Excellent Fluorite specimens are well known from Dal’negorsk, Primorskiy Kray, Russia. These are very highly regarded by collectors. China has become an excellent producer of Fluorite with notable localities at the Yaogangxian Mine, Hunan Province; Shangrao (De’An), Jiangxi Province; the Huanggang Mine, Inner Mongolia; and the Shangbao Mine, Hunan Province. Rounded botryoidal balls, a rare form for Fluorite, comes from Mahodari, Nasik District, Maharashtra, India.

In South Africa, excellent deep-green octahedral Fluorites are found in Riemvasmaak, Northern Cape Province. The Erongo Mountains of Namibia have produced a highly desirable and unique habit of green Fluorite in cuboctahedral form with an “alien eye” appearance.

Metaphysical Properties (Book of Stones; Simmons & Ahsian): Fluorite is a powerful Wind element stone. It speaks of the power of thought, focus, and concentration. It can assist in clearing away mental fog, confusion, or conflicting ideas. Fluorite is a powerful stone to use in balancing the brain. It helps overcome the fear of the future. It aids in thinking through one’s feelings when one is overwhelmed by emotional experience. Fluorite assists in balancing brain chemistry, enhancing learning and memorization abilities, and stimulating the brain.