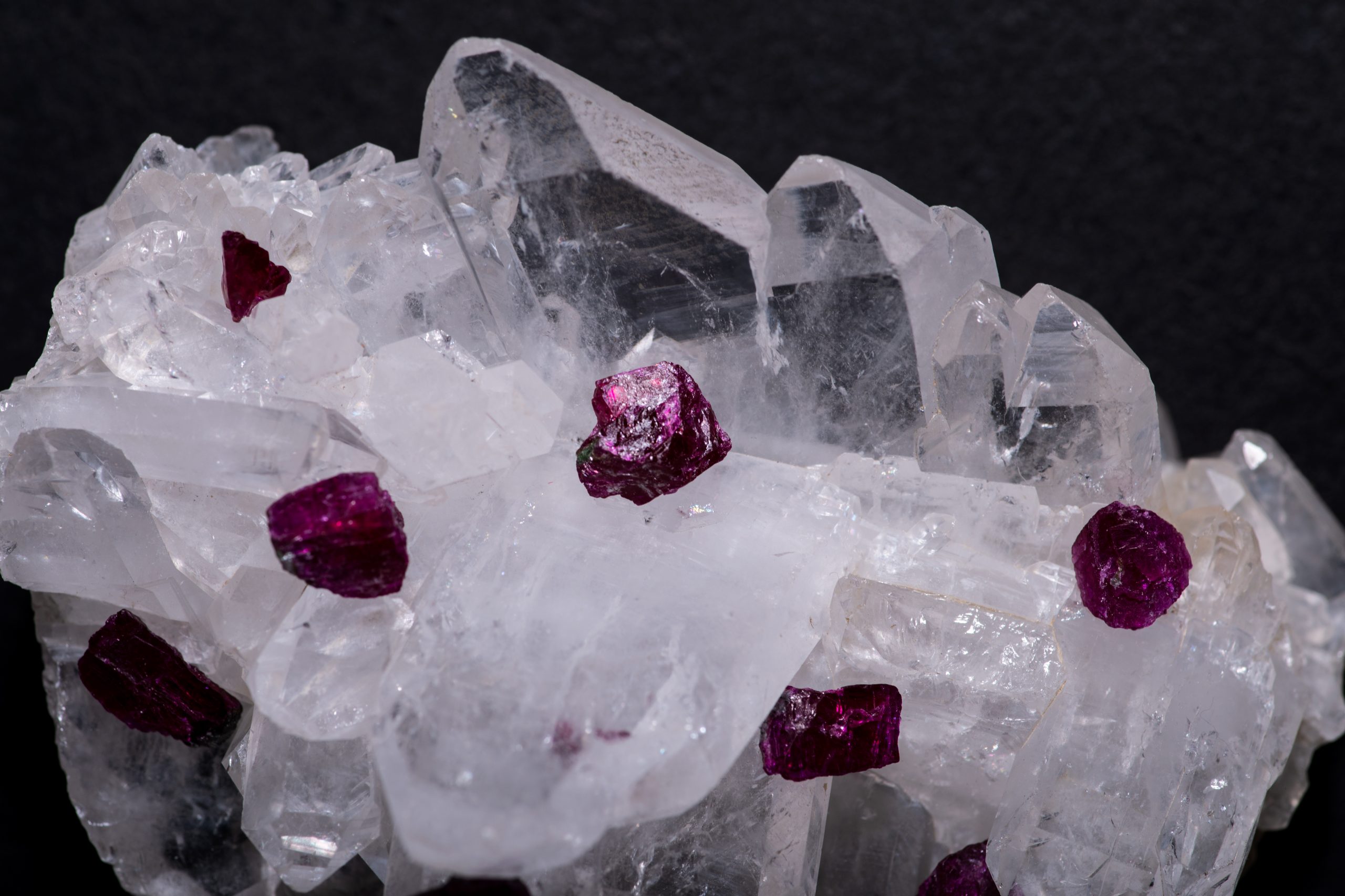 Corundum is an aluminum oxide mineral (Al2O3). The gem varieties of Corundum are Ruby and Sapphire. Ruby is the red variety of Corundum. The red color is caused by traces of chromium replacing aluminum in the crystal structure. Sapphire can be blue, red, pink, yellow, grey, or golden-brown. The most valued color is blue. The color of Sapphire depends on traces of titanium or iron. A black granular variety of Corundum is called Emory which gets its color from impurities of hematite, spinel, or magnetite. Star Ruby is a Ruby exhibiting asterism in the form of a six-rayed star. Star Sapphire is a Sapphire displaying asterism also in the form of a six-rayed star. Asterism is due to oriented needle-like inclusions or to colloidal or other material deposited in oriented tubules.

Corundum is the second hardest mineral on earth (after diamond). Corundum is a 9.0 on the Moh’s Scale. Emory is mined for use as an abrasive on sandpaper and on large tools used to machine metals.

Corundum belongs to the Trigonal Crystal System in the class of Hexagonal scalenohedral. Crystals occur as hexagonally shaped prismatic and tabular crystals, and as bipyramidal hexagons that are wider in the center and taper thinly on the ends. Crystals are usually elongated and striated crosswise. Other habits include barrel-shaped hexagonal crystals, modified octahedrons, rhombohedral crystals, massive or granular.

Corundum is easily synthesized, and many Corundum abrasives are synthetic. Synthetic gems are also easily created by adding traces of certain color-producing elements to the Corundum solution. Natural Ruby and Sapphire gemstones may have their color artificially enhanced or deepened through heat treatment when used as gems.

Corundum occurs in silica-poor rocks including altered metamorphic rocks such as marble and hornfels, in nepheline syenite pegmatites, and in placer deposits.

Notable Localities: The area of Mogok, Myanmar (Burma) is the source of some of the best gem-quality Ruby. Another significant Burmese deposit is Mong Hsu, which is currently a major Ruby producer, though its color isn’t as fine as the Mogok material. Sri Lanka, especially the area of Ratnapura, Bibile, and Rakwana, is an excellent source of gem-quality Corundum of all colors. The finest and largest crystallized specimens and aggregates of gem-quality Sapphire are from Sri Lanka.

Africa has recently become a significant producer of Corundum, especially in Madagascar, where it is found in the Zazafotsy Quarry, Ambahatraso; and in Andranondambo, Amboasary District. A famous African locality in which opaque rubies are found in green Zoisite is in Longido, Kilimanjaro Region, Tanzania. Another important Tanzanian Ruby mine is Winza, in Arusha.

In the United States, the Yogo Gulch in Judith Basin County of Montana has produced a choice, deep blue Sapphire crystals. Not far from the Yogo Gulch, near Helena, waterworn Sapphires stones are found in the Missouri River throughout its length in Lewis and Clark County. Montana is also the claim to a few other localities: the Gallatin Gateway and Salesville, Gallatin Co.; Rock Creek, Granite Co.; and Cottonwood Creek, Deer Lodge County. In California, well-formed, elongated Corundum crystals were found in Cascade Canyon in the San Gabriel Mountains, San Bernardino County. A well-known Ruby locality is the Cowee Creek District, Macon Co., North Carolina, especially the area of Franklin. Large deposits of Emery were once worked near Peekskill, Westchester Co., New York; and Chester, Hampden Co., Massachusetts. An important Canadian occurrence of Corundum is the Burgess Mine, Bancroft, Hastings Co., Ontario.

In Colorado, Corundum is found mostly in metamorphic rocks in the mountainous terrain of Chaffee County. Other Colorado occurrences are in the counties of Clear Creek, Custer, Jefferson, Larimer, Moffat, Routt, and Teller.

Metaphysical Properties (from The Book of Stones by Simmons and Ahsian):

Ruby has the effect of energizing and activating one’s physical, mental, and emotional body. Rubies enhance one’s passion and fortitude, allowing for the wholehearted pursuit of one’s aspirations. They eliminate feelings of hopelessness or defeat from one’s thoughts. They open the wellspring of optimism and determination needed to accomplish difficult goals. They impart a feeling of power to the wearer, improving self-confidence. Blue Sapphire is a stone of mental and psychic activation, an enhancer of insight, extrasensory perception, and mental agility. Blue Sapphire is associated with mental discipline and focus, the determination and ability to use the activated mental energies to accomplish one’s goal.