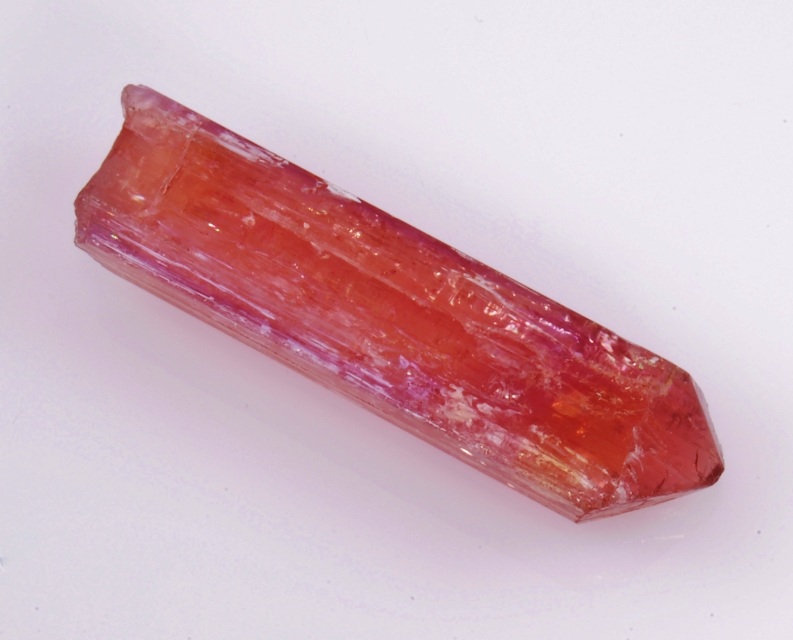 Topaz is a popular gemstone and mineral collector specimen. It is prized for its high reflectivity, hardness, luster, clarity, and range of color. Topaz is November’s birthstone. Topaz is an aluminum fluorosilicate mineral. It has perfect basal cleavage with conchoidal fracturing. Specific gravity is 3.5 to 3.6 and increases with fluorine content. Hardness is 8 on Moh’s scale. Topaz has vitreous to glassy luster, a white streak, and is not soluble in acids.

Crystals: Topaz crystals belong to the Orthorhombic Crystal System in that all three axes are unequal in length and all axes are perpendicular to one another. Crystals are typically prismatic with dipyramidal terminations and diamond cross-sections.

Color: Topaz ranges in color from colorless to blue, to shades of light green, yellow, orange, golden, sherry, brownish orange, and more rarely pink or violet-pink. Topaz is colorless in its purest form with no minor impurities and free from exposure to natural or laboratory irradiation.

Many brown topazes become colorless when exposed to prolonged sunlight. Most topaz jewelry found today in stores at low to moderate prices has been treated in a laboratory. Colorless topaz can be heated, irradiated, and coated with thin layers of metallic oxides to alter its color. Natural blue topaz is extremely rare and is usually pale blue. Almost all of the blue topaz offered in stores today is colorless topaz that has been irradiated and then heated to produce a blue color.

Imperial Topaz: When pink topaz was first discovered in Russia, ownership was restricted to the Czar and his family; hence the name imperial topaz. Traditionally, imperial topaz was orange in color with red dichroism. Today, the term is used for golden yellow color from two localities: near Ouro Preto, Minas Gerais, Brazil, and near the Sanarka River, Chelyabinsk Oblast, in the Ural Mountains region of Russia.

Occurrence: Topaz is found in volcanic and plutonic igneous and metamorphic environments. It crystallizes from fluorine-rich fluids and vapors in rhyolites, veins, granites, greisens, and pegmatites. It also occurs in hydrothermal veins and high-temperature metamorphic rocks. Notable Localities include Schneckenstein, Saxony in Germany; near Ouro Preto, Minas Gerais, Brazil; in Gilgit-Baltistan Province of Pakistan; near Volyndarsk-Volynsky of Ukraine; in Kleine
Spitzkoppe of Namibia; in the Mokrusha-Mursinka District, Ural Mountains of Russia; and in Paprok, Laghman Province of Afghanistan. In the United States, Topaz is well-known in San Diego County, California; in the rhyolites of the Thomas Range, Utah; and numerous localities in Colorado. The Pikes Peak Batholith has many locations from Crystal Park (El Paso County) to Devil’s Head (Douglas County) to the most productive and widely collected Tarryall Mountains
(Park County).

Metaphysical Properties (Book of Stones, Simmons, and Ahsian): In the Middle Ages in Europe, topaz was believed to enhance mental powers, improve poor vision, and prevent insanity. Today, the benefits of topaz vary according to the type and color.

White Topaz (Colorless) enhances one’s focus and speeds up the vibrational energy of one’s intentions. It helps individuals in gaining confidence to face the truth and to speak it clearly.

Golden Topaz (Imperial Topaz) is a stone of great value for the enhancement of one’s creativity, personal will, and ability to manifest one’s desires. It teaches us the importance of boundaries. It aids in clarifying one’s intent and one’s emotional, physical, and mental boundaries.

Blue Topaz can clearly provide an enhancement of one’s mental processing and verbal skills, as well as improving one’s attention span and ability to concentrate on mental tasks.