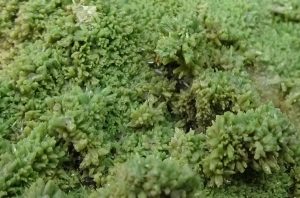 Pyromorphite – another treasure from lead!

Pyromorphite [Pb5(PO4)3Cl] is a member of the Apatite group, a group of isomorphous hexagonal minerals. It is very similar in structure and appearance to Mimetite. In fact, sometimes Pyromorphite and Mimetite are virtually indistinguishable from each other and may be wrongly labeled as the other. Pyromorphite is a Lead chloro-phosphate mineral. The phosphate radical (PO4) may be partially replaced by an arsenate radical (AsO4), thus forming a series with Mimetite.

Crystal Forms: Pyromorphite occurs as barrel-like hexagonal crystals, which are usually grouped together in interesting aggregates, and may be bipyramidal. Also acicular, fibrous, crusty, grainy, radiating, reniform, botryoidal, and in curvy aggregates. Some larger crystals may be hollowed out on the ends or have a hopper growth pattern.

Environment: Occurs as a secondary mineral in the oxidation zone of lead ore deposits.

Pyromorphite is a minor ore of lead where it occurs with more abundant lead minerals. It is also a popular mineral among collectors.

Many outstanding specimens have recently been coming out of China, with an exceptionally brilliant apple-green color. These specimens come from the Daoping and adjacent Yangshuo Mine in Gongcheng, Guangxi, China. Australia also contains many fabulous occurrences, specifically Broken Hill, New South Wales; the Rum Jungle, Batchelor, Northern Territory; the Black Star Mine, Mount Isa, Queensland; and Zeehan, on the island of Tasmania. Large plates have come from the Broken Hill Mine, Kabwe, in the African country of Zambia. In Mexico, light green crystals associated with Wulfenite come from Mapimi, Durango; and nice crystal clusters from the San Luis Mine, San Jose, Chihuahua. In Canada, specimens were found in the Society Girl Mine in Moyie, British Columbia.

In the United States, the finest specimens are from the Coeur d’Alene District in Shoshone Co., Idaho. This area has several prolific mines, the most notable is the Bunker Hill Mine in Kellogg, where outstanding green and orange crystals and sparkling globular masses were found. The most classic U.S. locality is Phoenixville, Chester Co., Pennsylvania, which has produced some famous old-time examples, especially from the famed Wheatley Mines. Another old locality, which contains mostly microcrystals, is the Loudville Lead Mine, in Easthampton, Hampshire Co., Massachusetts.

Metaphysical Properties (Book of Stones, Simmons & Ahsian): Pyromorphite is a powerful healing ally and is one of the foremost stones to utilize in treating cancers of all types. Emotionally, pyromorphite reveals negativity in one’s thoughts, attitudes, and actions. It can aid in shedding thought forms and emotional energies picked up from the environment or from other people who are resonating with negativity. Pyromorphite is a stone of the solar plexus and heart chakras. It aligns and blends love and will, so one cannot easily choose to act in ways that are unloving.

Another great article from Bill Jones of Sidewinder Minerals.