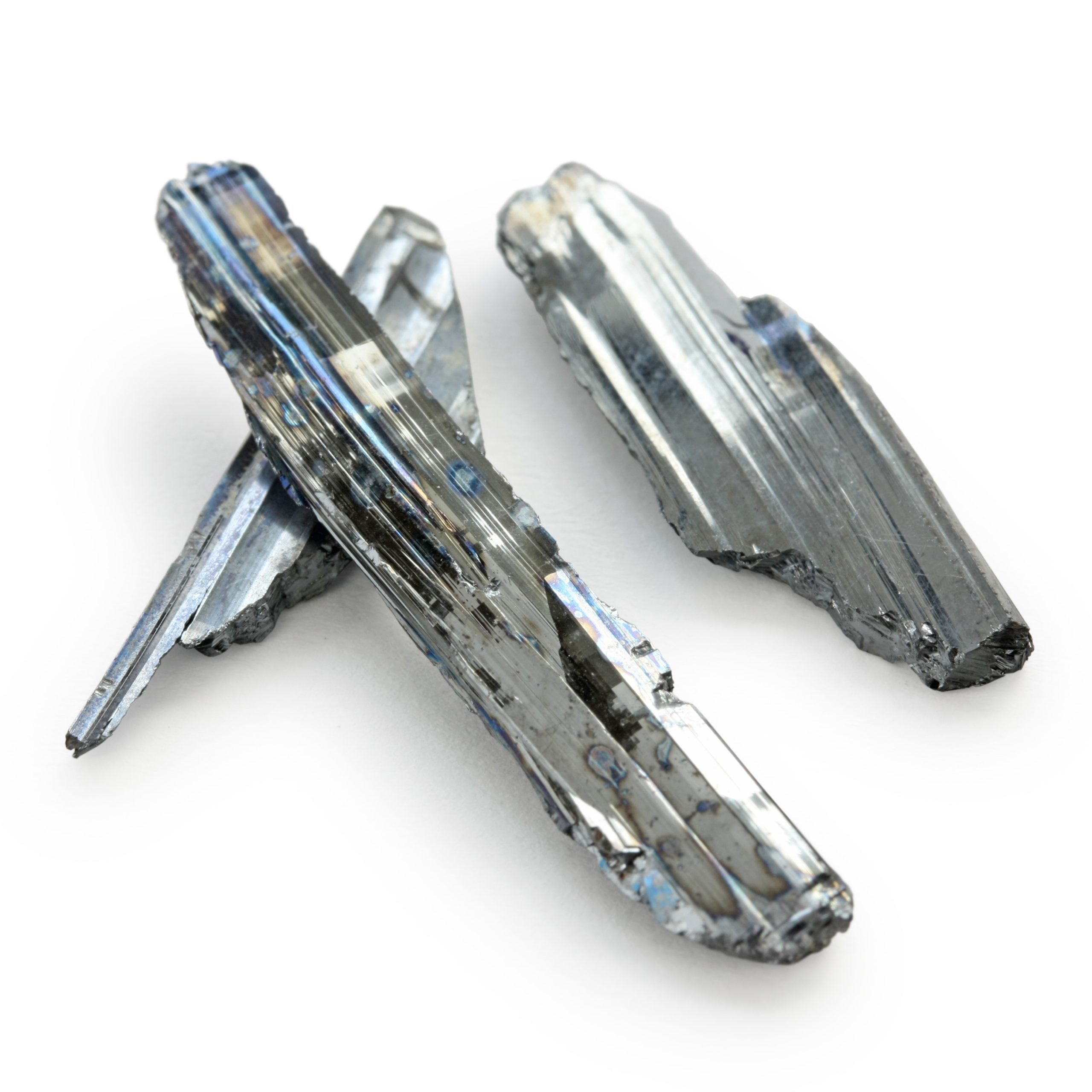 As far back as 3,100 BC, powdered Stibnite was used as an eyeshadow by ancient civilizations. Stibnite was also used as a treatment for eye infections. Today, Stibnite is used in fireworks, namely in the glitter and fountain mixtures. Needle-like crystals, “Chinese Needle”, are used in glitter compositions and white pyrotechnic stars. The “Dark Pyro” version is used in flash powders to increase their sensitivity and sharpen their report. It is also a component of modern safety matches.

Stibnite has a hardness of 2 on the Moh’s Scale. It is extremely soft and brittle. As a result, stibnite is rarely used in jewelry. Color is metallic silver-gray. Sometimes, crystals are iridescent. Over time, crystals may oxidize to black. Luster is brilliant metallic and always opaque.

Stibnite occurs in hydrothermal deposits and hot mineral springs. It is associated with other sulfide minerals, as well as calcite, chalcedony, cervantite, stibiconite, ankerite, and barite.

Localities of note: The Ichinokawa mine, on Shikoku Island, Japan, is famous for producing outstanding large crystals and groupings. Several localities in China have become the most recent producers of exceptional Stibnite specimens. The most important Chinese deposit, as well as the world’s largest antimony mine, is the Xikuangshan Mine, Lengshuijiang, Loudi Prefecture, Hunan Province. Other important Chinese localities include the Wuning Mine, Qingjiang, Jiangxi Province; Qinglong, Guizhou Province; the Dahegou Mine, Lushi, Henan Province; and Nandan, Hechi Prefecture.

In South America, there are several good localities in Peru, including Quiruvilca, La Libertad Department; the Paloma Mine, Huancavelica Dept; and Raura, Lima Dept. Another important South American locality is the Socavón Mine, Oruro, Bolivia. In Mexico, a noted occurrence is San Martín, Zacatecas.

In the United States, the best-known Stibnite is from the White Caps Mine, Manhattan District, Nye County, Nevada. Other localities include the Murray mine, Independence Mountains, Elko County, Nevada; the Stayton District, Hollister, Diablo Range, San Benito County, California; the McLaughlin Mine, Knoxville, Napa County, California; and the Red Devil Mine, Bethel Borough, Alaska.

Metaphysical Properties (from The Book Of Stones, by Simmons and Ahsian): Stibnite is a stone carrying the power of the underworld. It is associated with the god Pluto. It emanates Pluto’s energy of transformation, death and rebirth, new perspectives, great wealth and power. It can assist one in making profound changes in the self. For inviting contact with extraterrestrials, Stibnite should be used with Moldavite or Pallasite Meteorite.

Stibnite is useful for moving energy through the physical body. In healing work, it aids the body in integrating energy and in shifting genetic patterns to reflect one’s spiritual evolution. Stibnite assists one in more easily shifting into resonance with the high-frequency energy we are now being asked to carry in our bodies. It can help counter the symptoms of energy shift such as dizziness, headaches, inability to concentrate and heart palpitations caused by the Earth’s varying magnetic field. Stibnite can help one release fears about the exploration of the spiritual world and higher realms.

For more information on Stibnite, visit mindat, and join our community on Facebook, Instagram, or our events at RMGM promotions.