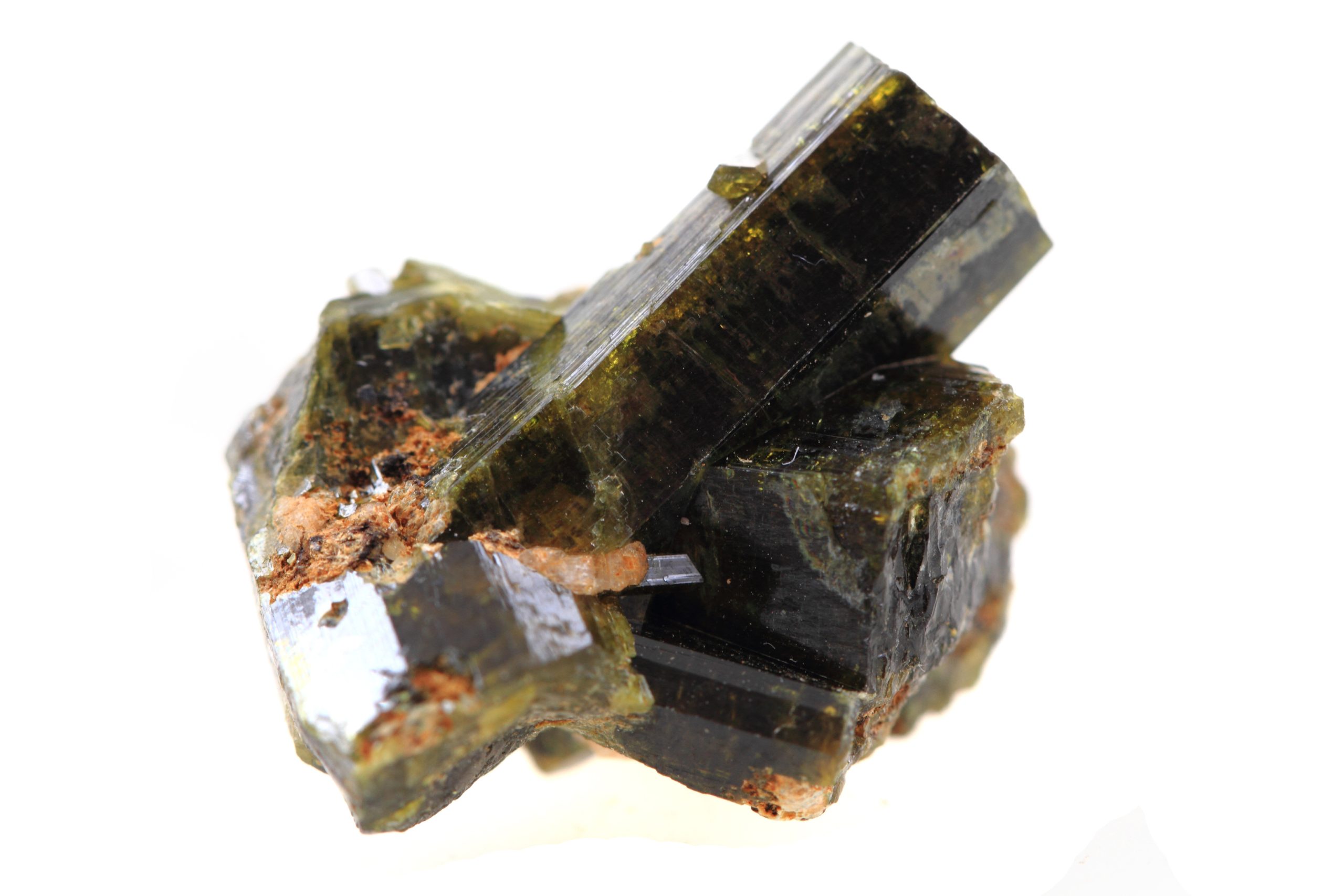 Epidote is one of the most highly valued display minerals. The most desirable form of Epidote is in elongated crystals that are quite lustrous and often clustered. It is a calcium iron aluminum silicate mineral, generally some shade of green in color but sometimes might be black. Epidote forms a series with Clinozoisite. In that series, the iron in Epidote is substituted by aluminum toward the Clinozoisite end member. Hardness is 6 – 7 on the Moh’s Scale. Crystals usually have a vitreous luster.

Epidote occurs in several different environments. The mineral is found in hornfels and skarns in contact with metamorphic rocks and metamorphosed limestone. Epidote is also located in schists of regional metamorphic rock. It also occurs in igneous rock is basalt and diabase and occasionally in granite pegmatites.

Epidote is also a rock-forming mineral. Two rock types that contain significant amounts of epidote are epidosite and unakite. Epidosite occurs as a metamorphic rock composed mainly of epidote with small amounts of quartz. Unakite is a rock that forms from the metamorphism of granite. Epidote alters Less-resistant minerals in the granite or replaced, with the orthoclase and quartz remaining creating Unakite. It is a popular pink and green-colored rock. Unakite was first discovered in the Unakas Mountains of North Carolina, from which its name is derived. Unakite is popular in the lapidary trade. It is considered to be a semiprecious stone. The bright pink and pistachio green colors are very unusual and attract attention. Unakite is often used to make beads, ornamental objects, and cut into cabochons.

In Europe, the classic Epidote locality is in the Austrian Alps. Those found in Knappenwand in the Untersulzbach Valley, occur as highly regarded large sharp and lustrous crystals. Two other classic localities in the Alps are Wallis, Switzerland; and Le Bourg d’Oisans, Isère, France.

Some of the most outstanding Epidote crystals come from Pakistan, in the Tormiq valley, Skardu District, and in Alchuria and Hachupa in the Shigar Valley. A new location is the Raskoh Mountains, Kharan, in Balochistan Province. There occur Lustrous crystals from a limited find described from Kuh-e Khorram, Zagros Mountains, Markazi Province, Iran. In China, excellent wedge-shaped crystals come from Handan, Hebei Province; and small sparkling grass-green crystals from the Hongquizhen Quarry, Sichuan Province.

Metaphysical Properties (from Book of Stones by Simmons and Ahsian): Epidote is a Water and Earth element that assists one in transmuting density into energy. Epidote assists in releasing patterns of negativity from the emotional body. It can help those who habitually use judgment, sarcasm, or other expressions of negativity to raise the energy of their emotional bodies to more positive, enlightened levels. Epidote can help one find the core patterns behind the physical disease and can assist one in moving into a hopeful and positive emotional state to support general healing. It aids in dissolving blockages, tumors, cysts and other manifestations of energetic density.