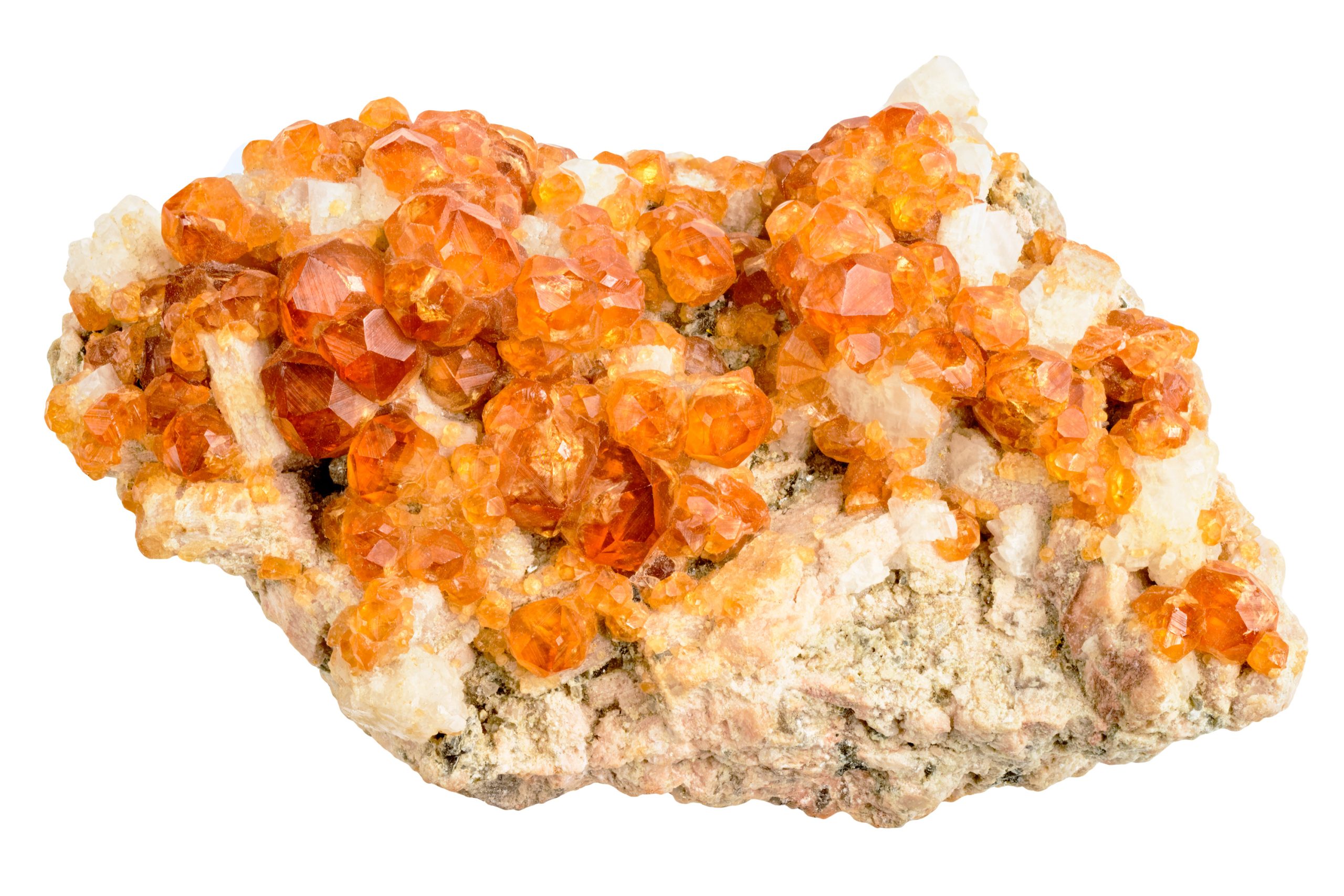 Spessartine is a manganese aluminum silicate mineral. It is a member of the Garnet Group of minerals. Spessartine is famous for its orange and reddish-orange colors, crystal forms, and its hardness. Spessartine forms a solid solution series with Almandine. It can be very difficult to distinguish between the two in certain localities. Spessartine is named after the Spessart Mountains, in Bavaria, Germany, which is the type locality for this mineral. Names confuse some of Spessartine with rock spessartite. Spessartite is a type of igneous rock consisting of feldspar, hornblende, and other minerals.

Transparent Spessartine can be faceted as a gemstone and used in jewelry. It is the most widely used orange and reddish-orange Garnet. Spessartine specimens, especially those found in Tanzania, are very popular among mineral collectors.

Spessartine garnets occur in many colors including orange, brown, brownish-red, red, dark red, pink, yellowish-brown, yellow, gray, and black. The color variance is from trace elements (less than 1%) substituting for manganese or aluminum.

Spessartine usually forms in single trapezohedral crystals, which are often well developed. Less often in dodecahedral crystals or in trapezohedral-dodecahedral combinations. Also in dense crystal clusters, grainy aggregates, drusy, massive, and in veins in host rock. Crystals are occasionally striated and are sometimes in heavily etched complex forms. Spessartine is found in certain environments such as in igneous rocks in granite pegmatites, and in contact and regional metamorphic schists and hornfels.

Physical Properties: Hardness is 6.5 – 7.5 on the Moh’s Scale. Spessartine belongs to the Isometric Crystal System, Hexoctahedral Class. Spessartine has no cleavage. Luster is vitreous. Spessartine is not fluorescent under ultraviolet light.

Where Spessartine is found

Noteworthy Localities: A recent outstanding discovery of bright orange Spessartine crystals in Tanzania was first brought to the market in 2008. The deposit is in Nani, Loliondo, Arusha Region, Tanzania near the Serengeti National Park. Malaya Garnet (a trading name for the Garnet intermediary between Spessartine and Pyrope) is well-known from Mwakaijembe in the Umba River Valley, Tanzania. Bright orange crystals once came from Marienfluss, Kunene Region, Namibia, but these high-quality Spessartine specimens are very hard to find today. Another important African locality is the Jos Plateau, Nigeria.

Another recent outstanding discovery of Spessartine was in China, where it was first discovered in the late 1990s in Tongbei and Yunling, Zhangzhou Prefecture. The Chinese Spessartine is often in dense aggregates of small gemmy crystals coating Smoky Quartz. The finest dark red Spessartine, usually associated with contrasting white Albite, comes from Pakistan at Shengus and the Shigar Valley, Skardu District; and the Gilgit District. Spessartine of similar quality is also found in Darra-i-Pech, Nangarhar Province, Afghanistan.

(from Book of Stones by Simmons and Ahsian): Spessartine Garnet stimulates all aspects of one’s creative abilities and energies. It encourages one to take action toward one’s dreams, visions, and goals. It can help increase the flow of chi energy through the body and is an excellent stone for general invigoration and health.

Spessartine Garnet assists in overcoming one’s fear of new experiences. It encourages one to be more impulsive, spontaneous, and intuitive. Even as it encourages risk-taking, it can help alleviate the fear of failure. It gives one confidence to change one’s life and take new paths.