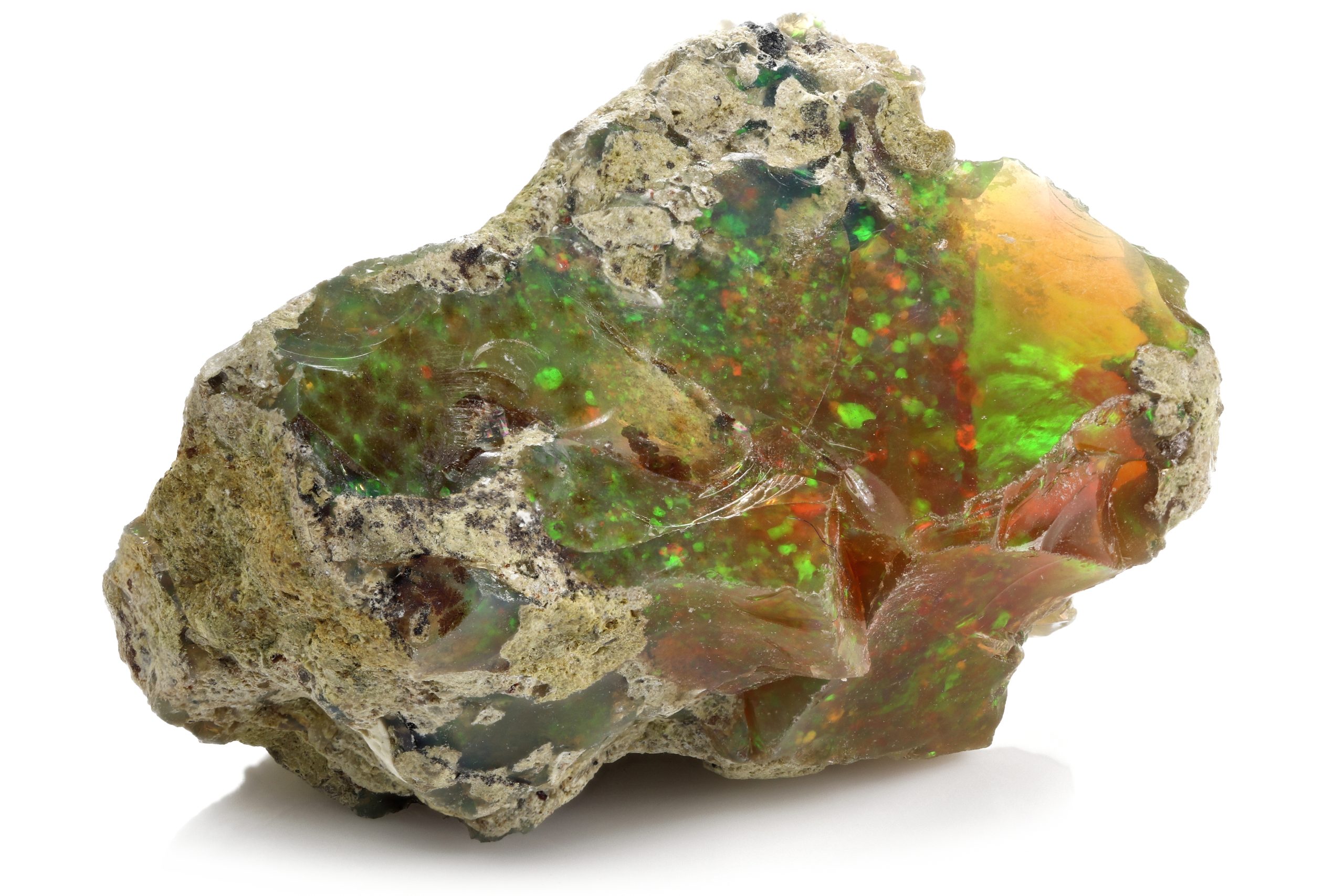 The rich play of color in some Opals gives them unsurpassed splendor and mystique. This effect gives Opal the title of the Queen of All Gems, as it can capture a rainbow in one stone. Opal is the birthstone for October. This gemstone is the national gemstone of Australia.

Since Opal is amorphous, it is not technically a mineral but is classified as a mineraloid. One of the scientifically accepted standards defining a mineral is that a mineral must have a crystal structure, which opal lacks. Despite this, virtually all scientific references categorize Opal together with the true minerals.

Opal basically consists of hydrated silicon dioxide (aka silica). Its water content may range from 3 to 21% by weight but is usually between 6 and 10%. There are two broad classes of Opal: precious and common. Precious Opal displays play-of-color (iridescence); Common Opal does not. The electron microscope during the mid-1960’s became the discovered reason for the color play. Precious Opal is composed of tiny silica spheres that are arranged in an orderly pattern. This diffracts the light entering the stone into the spectral colors. A light wave diffracted through the Opal causes a color sheen or scintillation in the stone. The density and pattern of the aligned silica spheres are responsible for the different colors refracted in the Opal. Gives Opal the title as the Queen of Gems.

Common Opal lacks this effect, since its spheres are disordered or too compact to permit the light from refracting. Sizes of the spheres vary the color seen in precious opal. Spheres that are approximately 0.1 micron (one ten-millionth of a meter) in diameter produce violet. Spheres about 0.2 microns in size produce red. Sizes in between produce the remaining rainbow colors.

The colors and luster of Opal

The base colors of Opal (before play-of-color) are colorless, white, yellow, orange, red, purple, blue, green, gray, brown, and black. Opal often fluoresces, usually bright green, but also light green, light blue, purple, and white. Opal habits include massive, botryoidal, reniform, stalactitic, earthy, nodular, as veins, in crusts, and in accumulating mounds. It often pseudo morphs after organic matter such as wood, shell, and bone. Luster is usually vitreous, but may also be pearly, waxy, or resinous. Hardness is 4.5 – 6.5 on the Moh’s Scale.

Numerous Varieties of Opal, the Queen of all Gems

Varieties: Opal has an abundance of varieties. The list below attempts to define those names:

Boulder Opal – Precious Opal from Queensland, Australia, found in the cracks of, or as coatings on, ironstone or sandstone boulders.

Chloropal – Opal similar to Prase Opal, but with a lighter green hue.

Chrysopal – Opal similar to Prase Opal, but with a golden-green color.

Common Opal – Any Opal without play of color.

Contra Luz Opal – Opal where the play of color is visible only when a light source is behind the stone.

Crystal Opal – Transparent to translucent Opal where play of color is visible on the surface and in the interior of the stone.

Diatomite – Opal replacement of microscopic shells of diatoms (a type of microscopic organism clustered together in a rock-like formation. It is white, opaque, and chalky in texture. Synonym of Tripolite, Fuller’s Earth, and Diatomaceous Opal.

Harlequin Opal: A variety with a diamond-shaped, harlequin, or rectangular-shaped vivid pattern playing with color. Harlequin Opal is one of the rarest and most prized forms of Opal.

Honey Opal – Transparent to translucent Opal with an orange to orange-brown, honey-colored background. It may or may not display play of color.

Hungarian Opal – Describes Opal from the old sources in Hungary (as well as other places in Europe such as the Czech Republic). When used to describe white opal from other localities, the term becomes corrupted.

Hydrophane Opal – White, opaque, highly porous form of Opal, that when placed in water allows the water to seep into it. This causes the stone to become transparent and almost invisible while in the water.

Jelly Opal – A transparent Precious Opal with a gelatinous appearance and a bluish sheen. Jelly Opal may also refer to a colorless, transparent Common Opal.

Pineapple Opal – Opal pseudomorph after Ikaite that resembles a pineapple. It is found only in White Cliffs (New South Wales), Australia. The pseudomorphed mineral was originally thought to be Glauberite, but studies now prove it to be the rare and unstable mineral Ikaite.

Precious Opal – Any Opal with a play of color.

Tabasheer – Opal occurring as an organic byproduct. It forms by the hardening of a secretion issued from certain bamboo, forming a porous, rounded mass of Opal.

Wax Opal – Yellow to brown Opal with a waxy luster.

White Opal – Precious Opal with a light-colored body color, such as white, yellow, and beige.

Wood Opal – Any Opal that formed a pseudomorph after wood from a tree and retains the original shape and appearance of the wood.

Where Opal, the Queen of Gems is Found

Opal from Ethiopia first appeared in 1994, with the discovery of precious opal in the Menz Gishe District, North Shewa Province. This Shewa Province opal was mostly dark brown in color and tended to crack which made it unpopular in the gem trade. In 2008, a new opal deposit was found near the town of Wegel Tena, in Ethiopia’s Wollo Province. Wollo opal has become the dominant Ethiopian opal in the gem trade.

In Mexico, Precious Opals and Fire Opals come from several deposits. The most important are near Queretaro, in Queretaro state, and near Magdalena, in Jalisco state.

For more information about Opal – the Queen of Gems, visit mindat.org or join our Facebook group to network with others of like minds. Visit us on Instagram and/or join us at our Gem and Mineral shows.