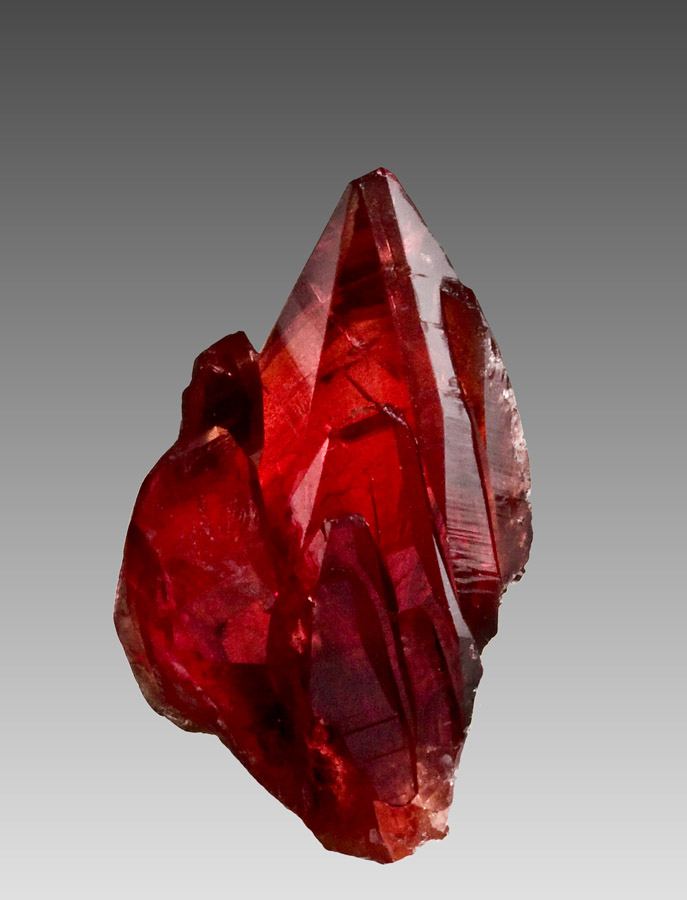 Rhodochrosite is a manganese carbonate mineral with a chemical composition MnCO3. In its (rare) pure form, it can be a cherry-red color, but impure specimens can be shades of pink to pale brown. It streaks white, and its Mohs hardness varies between 3 and 4. Its specific gravity is between 3.5 and 3.7.

It cleaves with rhombohedral carbonate cleavage in three directions. Crystal twinning often is present. It is transparent to translucent. Rhodochrosite will often be confused with the manganese silicate, rhodonite, but is distinctly softer. Rhodochrosite belongs to the Rhombohedral Division of the Trigonal Sub-group of the Hexagonal System.

Rhodochrosite forms a solid solution series with Siderite (iron carbonate) and also with Calcium. The varietal name for the pink calcite member in this series is Manganoan Calcite.

Calcium, iron, magnesium, and zinc (to a limited extent) frequently substitute for manganese in the structure, leading to lighter shades of red and pink, depending on the degree of substitution. These shades will often ensure that the most common color encountered for rhodochrosite is pink.

Rhodochrosite occurs as a hydrothermal vein mineral along with other manganese minerals in low-temperature ore deposits as in the silver mines of Romania where it was first found. The Rhodochrosite mineral can often be found all over the world. Mindat shows more than 1600 locations.

One will find that banded rhodochrosite hass been mined in Capillitas, Argentina. Catamarca, Argentina has an old Incan silver mine that has produced fine stalactitic examples of rhodochrosite that are unique and very attractive. Cut cross-sections reveal concentric bands of light and dark rose colored layers. Many specimens will be carved and used for many ornamental purposes.

Rhodochrosite is Argentina’s “national gemstone“. Colorado officially named rhodochrosite as its state mineral in 2002. Large specimens will often be found in the Sweet Home Mine near Alma, Colorado.

Other Colorado locations where rhodochrosite has been found include the Moose mine and Russell Gulch in Gilpin County. The minerals can also be discovered at Henderson mine, Urad mine, and the Idaho Springs District in Clear Creek County. Rhodochrosite is located also at Eagle mine in Eagle County; Sweet Home mine, Tanner Boy mine, and Russia mine in Park County. Climax mine, Julia Fisk mine, and John Reed mine in Lake County also boast Rhodochrosite.

The Mary Murphy mine in Chaffee County; Fluorine mine and Cripple Creek District in Teller County; Bonanza mine and Eagle mine in Saguache County; Champion mine in Hinsdale County are also homes. Within the Grizzley Bear, Idarado, Camp Bird, Mountain Monarch, Michael Breene, Royal Albert, and Daniel Bonanza mines in Ouray County, it will be found.

The Creede District and Equity and Bulldog mines in Mineral County; and the Sunnyside, Brooklyn, Golden Fleece, and Alaska mines of San Juan County are also home.

While we are most familiar with the rhombohedral crystals in Colorado, the Scalenohedral crystal form is well-known from the Uchucchacua mine in Peru and the N’Chwaning mine in South Africa.

Accordingly to folklore, the Incas had believed rhodochrosite was the blood of their former rulers turned to stone. Therefore this gave name to Rhodochrosite sometimes called “Rosa del Inca” or “Inca Rose”. It was first described in 1813 in reference to a sample from Cavnic, Romania.

Its main use is as an ore of manganese which is a key component of low-cost stainless steel formulations and certain aluminum alloys. Many quality banded specimens will be occasionally used as decorative stones and jewelry.

Due to its being relatively soft, and having perfect cleavage, Rhodochrosite MnCO3 is very difficult to cut, and therefore rarely found faceted in jewelry.

Manganese carbonate can often be extremely destructive to the amalgamation process used in the concentration of silver ores, and so until quality mineral specimens became highly sought after by collectors, they were often discarded on the mine dump.

Read more about Rhodochrosite and other minerals at Rockygems.com or mindat.