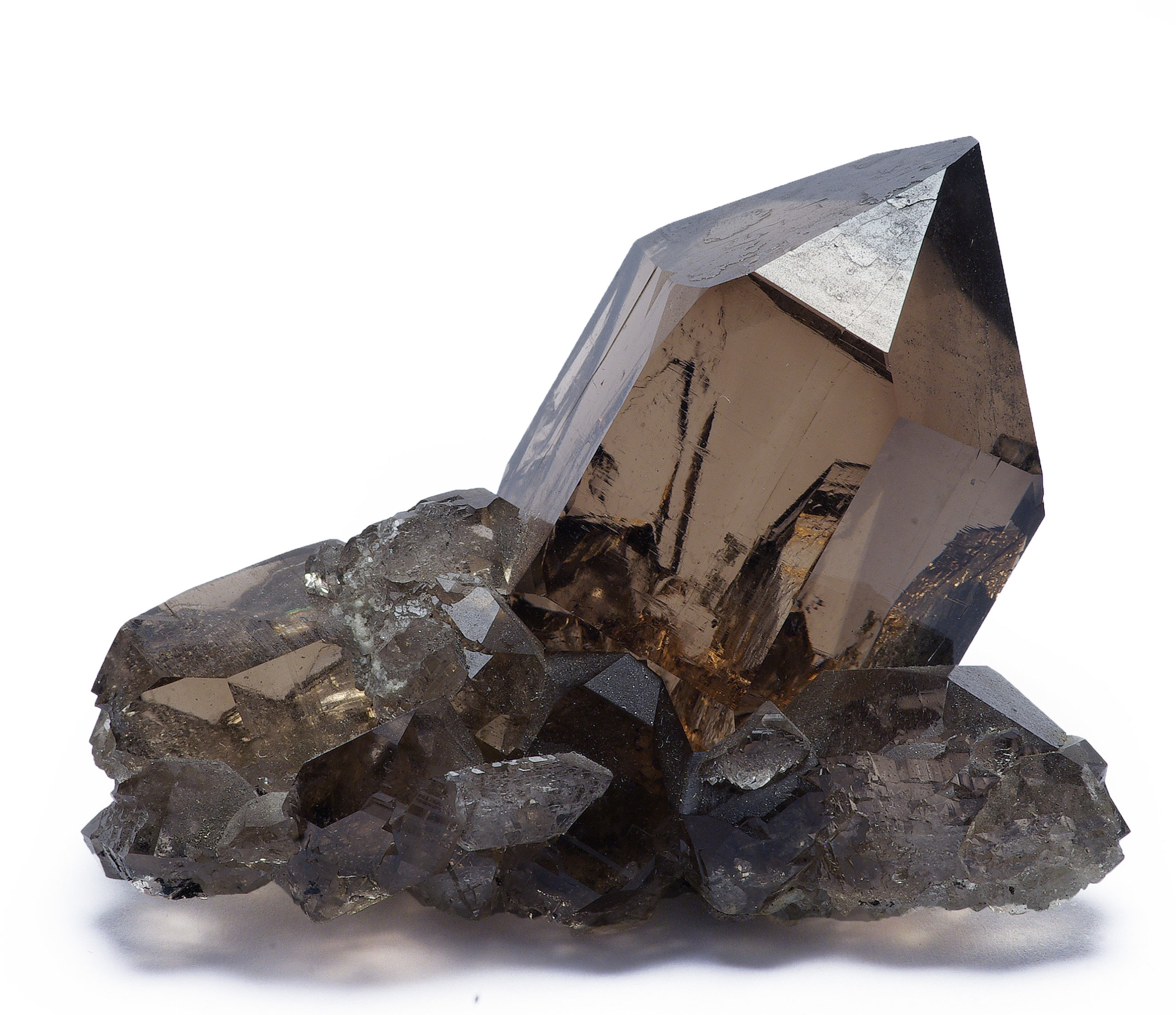 Quartz is a chemical compound consisting of one part silicon and two parts oxygen. It is silicon dioxide (SiO 2 ). Quartz is the most abundant mineral on the earth’s surface. It occurs in basically all mineral environments and is the important constituent of many rocks. Quartz is also the most varied of all minerals, occurring in all different forms, habits, and colors.

There are more variety of names given to Quartz than any other mineral. Although the Feldspars as a group are more prevalent than Quartz, as an individual mineral, Quartz is the most common mineral. Quartz is the mineral defining the value of 7 on the Mohs scale of hardness.

Quartz is present and plentiful in all parts of the world. Also known as the most abundant mineral on earth. This mineral also forms at all temperatures. Fabulous quartz is abundant in igneous (e.g., granite), metamorphic (e.g., schist, gneiss, and quartzite), and sedimentary (e.g., sandstone and shale) rocks. Quartz is highly resistant to both mechanical and chemical weathering. As a result, this durability makes it the dominant mineral of mountaintops and the primary constituent of sand.

Quartz occurs in a great number of varieties that differ in form and color. The mineral occurs as massive aggregates, dense nodules, or crystals. The color variety is intense – Quartz is colorless if pure, but may assume any color due to inclusions of other minerals or built-in trace elements. The more common of the varieties have been given their own names. The different forms of quartz are usually classified into 2 big groups:

Macrocrystalline are those that form visible crystals, like amethyst. When people talk about “quartz”, they usually think of macrocrystalline quartz.

The Quartz Page provides the following varieties of macrocrystalline quartz:

Aqua Aura  –  Quartz synthetically enhanced with a coating using gold (and sometimes other metals) to give it a neon blue or other neon color.

Blue Quartz  –  The blue variety of Quartz, which is very uncommon in nature and rarely in crystal form. Most Blue Quartz is what is popularly known as Aqua Aura. Blue Quartz may also refer to a dull grayish-blue Quartz in massive form with Crocidolite inclusions.

Cactus Quartz  –  Form of Quartz, usually Amethyst, Citrine, or a combination of the two, that contains a large crystal or crystals overgrown with a layer of spiky smaller crystals. Cactus Quartz is specific to Boekenhouthoek (Magaliesberg) in South Africa.

Faden Quartz  –  Group of Quartz crystals with a white thread-like zone running through the interior, with the crystals having formed around the thread axis.

Rainbow Quartz  –  Quartz synthetically colored with an iridescent layer formed from gold or other metals.

Scepter Quartz  –  Quartz crystal with a scepter like protrusion on the end of the crystal that is wider than the rest of the crystal.

Star Quartz  –  Polished Quartz displaying asterism in the form of a six-rayed star.

Cryptocrystalline are those that do not show any visible crystals and have a dense structure, like agate. These cryptocrystalline varieties are usually grouped together under the term Chalcedony. The Quartz Page provides the following varieties of Chalcedony:

Agate Jasper  –  Opaque multicolored Jasper, or Jasper with banding; may also refer to a single stone with a combination of both Agate and Jasper.

Aventurine  –  Opaque form of compact Quartz or Chalcedony containing small Mica, Hematite, or Goethite scales which cause a glistening effect. Although technically Aventurine is classified as rock due to its composition of several minerals, it most often is regarded as a variety of Quartz or Chalcedony.

Binghamite  –  Chalcedony with dense, parallel inclusions of Goethite. Its color is a multicolored yellowish to reddish, and it exhibits chatoyancy. Binghamite is found in the Cuyuna Iron Range in Minnesota and often classified as a rare gemstone.

Chert  –  Compact form of Chalcedony typically found as nodules in sedimentary rocks, usually with an off-white, gray, or cream color. Although technically Chert is classified as a rock due to its composition of other mineral impurities, it most often is regarded as a variety of Chalcedony.

Fire Agate  –  Form of Agate or Chalcedony that is iridescent with a play of colors or “fire” similar to that of Opal. Fire Agates usually have botryoidal bubbles included in their interior. The play of color is caused by inclusions of Goethite or Limonite.

Flint  –  Massive, uniformly colored form of Chalcedony that is somewhat impure. Flint is well-known for its sharp edges and usage as tools such as arrowheads by the early Native Americans. Although technically Flint is classified as a rock due to its composition of other mineral impurities, it most often is regarded as a variety of Chalcedony.

Grape Agate  – botryoidal form of purple chalcedony. Not an agate. Usually from Indonesia.

Hawk’s Eye  –  Pseudomorph of compact Quartz after the fibrous mineral Crocidolite, with a chatoyant sheen, very similar to Tiger’s Eye. It has a bluish-gray color, which differentiates it from Tiger’s Eye which has a yellow-brown color. It is formed from an incomplete pseudomorph process.

Holly Blue  –  Translucent, violet-blue variety of Chalcedony, often used as a gemstone. It is sometimes banded.

Moss Agate  –  Chalcedony containing dense inclusions of green Hornblende that cause the pattern to resemble moss. Moss Agate is not true Agate as it lacks the banding patterns of Agate.

Myrickite  –  Agate/Chalcedony or Opal with red bands or red spots of the mineral Cinnabar. It is named after Myrick Spring, San Bernardino Co., California.

Onyx  –  Form of Chalcedony with a solid black color or white and black banding. Occasionally also refers to banded Travertine or Tufa in the mineral form of Calcite or Aragonite with black and white bands.

Petrified Wood  –  Petrified Wood is wood that chemically replaced by a mineral substance. Chalcedony will usually replace this, but Opal and a few other minerals are also known to replace the wood. When the wood becomes petrified, its original mold remains intact, but an entirely new substance takes the place of what was once wood. When the mineral replacement of the wood is Chalcedony or Opal, the substance is also called “Silicified wood”.

Prase  –  Light to emerald green, transparent to translucent Quartz, with coloring caused from inclusions of green minerals, such as Actinolite, Hedenbergite, Chlorite, or Malachite.

Sard  –  Brownish to brownish-red, transparent to translucent form of Chalcedony.

Sardonyx  –  Form of Agate with parallel bands of brownish to red alternating with white or sometimes black bands.

Tiger’s Eye  –  Pseudomorph of compact Quartz after the fibrous mineral Crocidolite. Tiger’s Eye is famous for its chatoyant effect.

Quartz belongs to the trigonal crystal system. The ideal crystal shape is a six-sided prism terminating with six-sided pyramids at each end. In nature quartz crystals are often twinned, distorted, or so intergrown with adjacent crystals of quartz or other minerals as to only show part of this shape, or to lack obvious crystal faces altogether and appear massive.

Well-formed crystals typically form in a cavity that has unconstrained growth into a void. Usually, the crystals are attached at one end to a matrix, and only one termination pyramid is present. However, doubly terminated crystals do occur where they develop freely without attachment.

Quartz forms a number of different types of twins. Only three of them have generally accepted as twinning laws. Japan Law Twin is the only common twinning law of quartz where the two twin crystals are visible as individual crystals. In a Japan Law twin, the c-axis of two crystals meet at an angle of 84 degrees, with two of the prism faces of both crystals being parallel. The result is usually a V-shaped twin. Very often the Japan Law twin looks platy because the crystal grows faster between the two arms.

Very often Japan Law twins have grown in-between needle quartz crystals. Dauphiné Law twins can be thought of as a merger of two crystals of same handedness that is rotated by 60° around the c-axis relative to each other. They are penetration twins. In a Brazil Law twin, right and left-hand quartz structures are combined in a single crystal.

“Quartz crystal is a power stone that’s prized as a healing stone. It is known as the most powerful healing stone of the mineral kingdom, able to work on any condition. It has been called the “Universal Crystal” because of its many uses and is beneficial for manifesting, healing, meditation, protection, and channeling. Quartz is the most abundant mineral on Earth.

Due to its ability to balance, quartz is excellent for harmonizing and stabilizing one’s environment and is helpful in romantic relationships. Quartz amplifies healing energy and is particularly effective for chronic fatigue, arthritis, bone injuries, depression, diabetes, fibromyalgia, and intestinal troubles. It is also believed to improve mental and physical energy, stamina, and physical strength. Quartz enhances spiritual growth, spirituality, and wisdom.

Because it clarifies thought processes and emotions, it can increase inspiration and creativity. It can also help with concentration, studying, and retaining what one learns.” (firemountaingems.com). Each variety of Quartz and Chalcedony has its own metaphysical properties.

Quartz is the most abundant mineral on Earth.