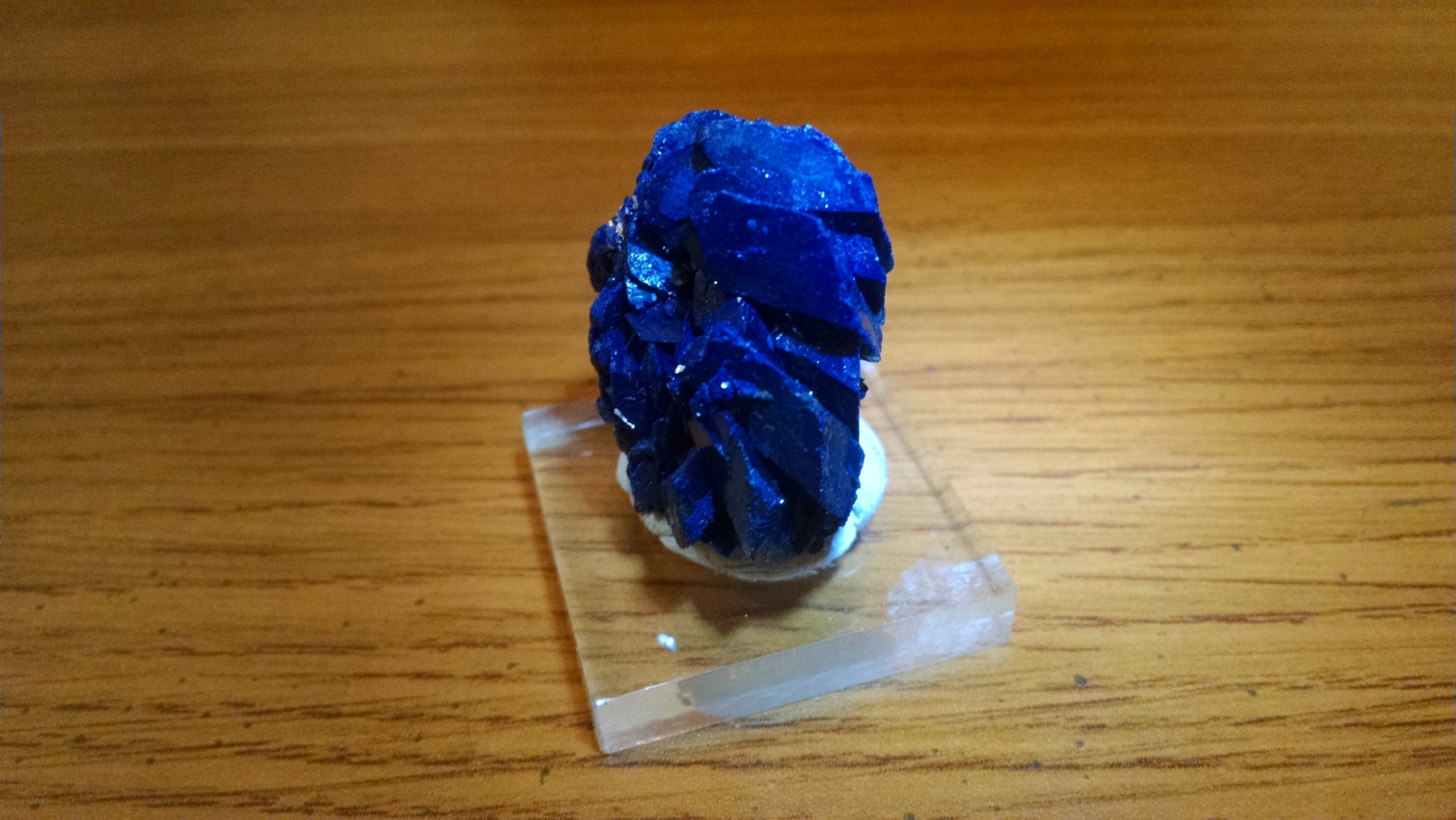 Azurite [Cu 3 (CO 3 ) 2 (OH) 2 ] is a copper carbonate mineral. It owes its name to its beautiful azure-blue color,
which makes it a very popular and well-known mineral. It usually occurs with green Malachite, which
may form green stains or specks on Azurite crystals or aggregates. The two minerals sometimes occur
admixed or banded together, forming what is called “Azure-malachite” in the gem and mineral trades. A
rarer Azurite mixture, known as “Bluebird”, is Azurite mixed with dark red Cuprite. Azurite, “Azure-
malachite”, and “Bluebird” all have gem uses. In some localities, the Azurite undergoes a chemical
change and loses some hydroxyl, altering the Azurite to Malachite, but retaining the crystal shape of the
original Azurite. Sometimes, only part of the Azurite is altered to Malachite, while the other part
remains as Azurite. Such specimens are green on one end and blue on the other. Linarite specimens are
sometimes mistakenly sold as Azurite since they both occur in the same locations and may strikingly
resemble each other. However, simple tests on physical properties can accurately distinguish the two.

Crystal Forms: Usually in small crystals, which are in prismatic, tabular, or equidimensional form.
Crystals are sometimes striated. Other forms are massive, crusty, radiating, fibrous, earthy, columnar,
stalactitic, thin needles, and ball-like aggregates. Also occurs in dense groups of tabular or
prismatic crystals. Azurite may also form as a pseudomorph over other minerals, retaining the original
crystal shape of the mineral that it formed a pseudomorph over.

Environment: It occurs as a secondary mineral in the oxidation zone of copper deposits.
Azurite is a very popular mineral among collectors. Bright blue pieces are polished into cabochons and
beads, and large masses are sometimes cut into ornamental objects. “Azure-malachite” is also carved as
cabochons and beads. Azurite was formerly crushed and used as a blue pigment. Azurite is also an ore of
copper.

Localities: Fine Azurite specimens have been obtained from numerous places. Some of the largest and
best individual crystals have come from Tsumeb, Namibia. Morocco has also produced excellent crystals
at Touissit and Kerrouchene. Good specimens have also come from Chessy, France; Laurium, Greece;
the Black Forest, Germany; Cornwall, England; Burra Burra, South Australia, and Broken Hill, New South
Wales, Australia. An interesting occurrence of radial Azurite discs on a white Kaolinite matrix is the
Malbunka Copper Mine, near Areyonga, Northern Territory, Australia. In Mexico, Azurite occurs in the
San Carlos Mine in Mazapil, Zacatecas; and in the Milpillas Mine in Cananea, Sonora, which has been
providing outstanding crystals to the market. In the United States, most fine specimens are from
numerous localities in Arizona, which includes the famous and classic locality of Bisbee, in Cochise Co.
Other localities in Arizona include Ajo and Tiger, Pinal Co.; and Clifton and Morenci, Greenlee Co. Azurite
also occurs in the Rose Mine in Grant Co., New Mexico, and elongated, tabular crystal clusters as well as
rounded ball concretions have come from the La Sal District and the La Sal Mountains, San Juan Co. and
Grand Co., Utah. Also in Utah is the Apex Mine, Jarvis Peak, Washington Co. A recent finding of Azurite
crusts have also been discovered in the Passaic Pit in Ogdensburg, Sussex Co., New Jersey.

Metaphysical properties (Book of Stones, Simmons & Ahsian)
Azurite is the stone of insight and vision. It is an excellent ally for opening and clearing the third-eye and
crown chakras, stimulating intuitive ability, and aligning inner vision to higher guidance. Azurite lends us
the inner sight to honestly see where our motives are based. It is a great aid to non-judgmental
discernment because it allows one to understand the true motives in others as well as oneself. Azurite is
helpful in all issues of the brain and head. It can help soothe migraines and balance vertigo.