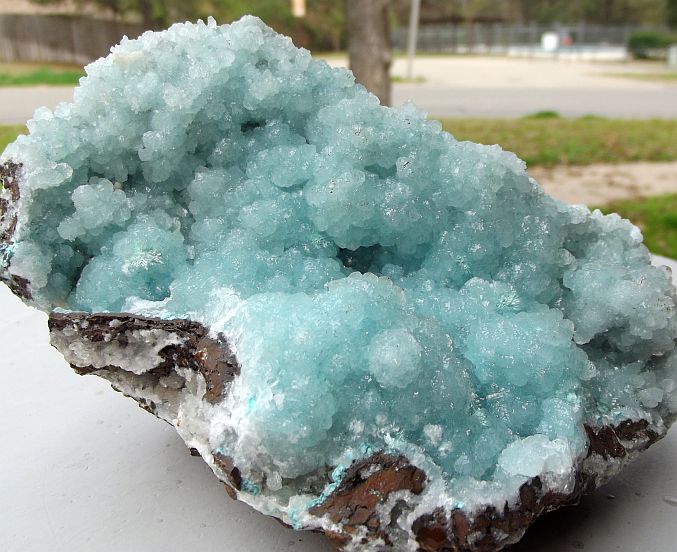 Hemimorphite (Zn4Si2O7(OH)2·H2O), is a zinc sorosilicate mineral which has been historically mined from the upper parts of zinc and lead ores, chiefly associated with Smithsonite. Hemimorphite is a unique mineral, with different crystal terminations on each side of a single crystal. This habit is responsible for its name, from the Greek hemi, meaning “half” and morph, meaning shape. Although this habit is very common among Hemimorphite crystals, its visibility is usually obscured by one end of a crystal being attached to the matrix.

Prior to 1803, Hemimorphite (zinc silicate) and Smithsonite (zinc carbonate) were thought to be the same mineral, called Calamine. In 1803, James Smithson, a British mineralogist, discovered that these were two distinct zinc mineral species that closely resembled each other.

Hemimorphite is a mineral of two main distinct patterns: A well-crystallized form, and a microcrystalline globular form. These two types of Hemimorphite appear entirely different from each other, and it is surprising that they are of the same mineral.

Hemimorphite occurs most frequently as the product of the oxidation of the upper parts of sphalerite bearing ore bodies. Hemimorphite is an important ore of zinc and also contains silicon, oxygen and hydrogen. The crystals are blunt at one end and sharp at the other.

Hemimorphite is found in many localities worldwide, though only a few have provided excellent mineral specimens. China has recently been producing some outstanding globular forms with a deep, neon blue color. The most notable localities are Dulong and Wenshan, Yunnan Province. Mexico is probably the most prolific country when it comes to collectible specimen production of Hemimorphite. The famous Ojuela Mine in Mapimi, Durango is one of the most prolific Hemimorphite localites, forming well-shaped crystals on a Limonite matrix. Very large white crystals and fans have been found at Santa Eulalia, Chihuahua.

Crystal habit: Crystals are flattened prismatic and tabular, and are usually in platy groupings. Also bladed, in fan shaped groupings, radiating, acicular, coxcomb, in rosettes, and druzy. Crystals grow in distinctive hemimorphic habits. Most commonly occurs in globular form such as botryoidal, mammillary, and stalactitic groupings.