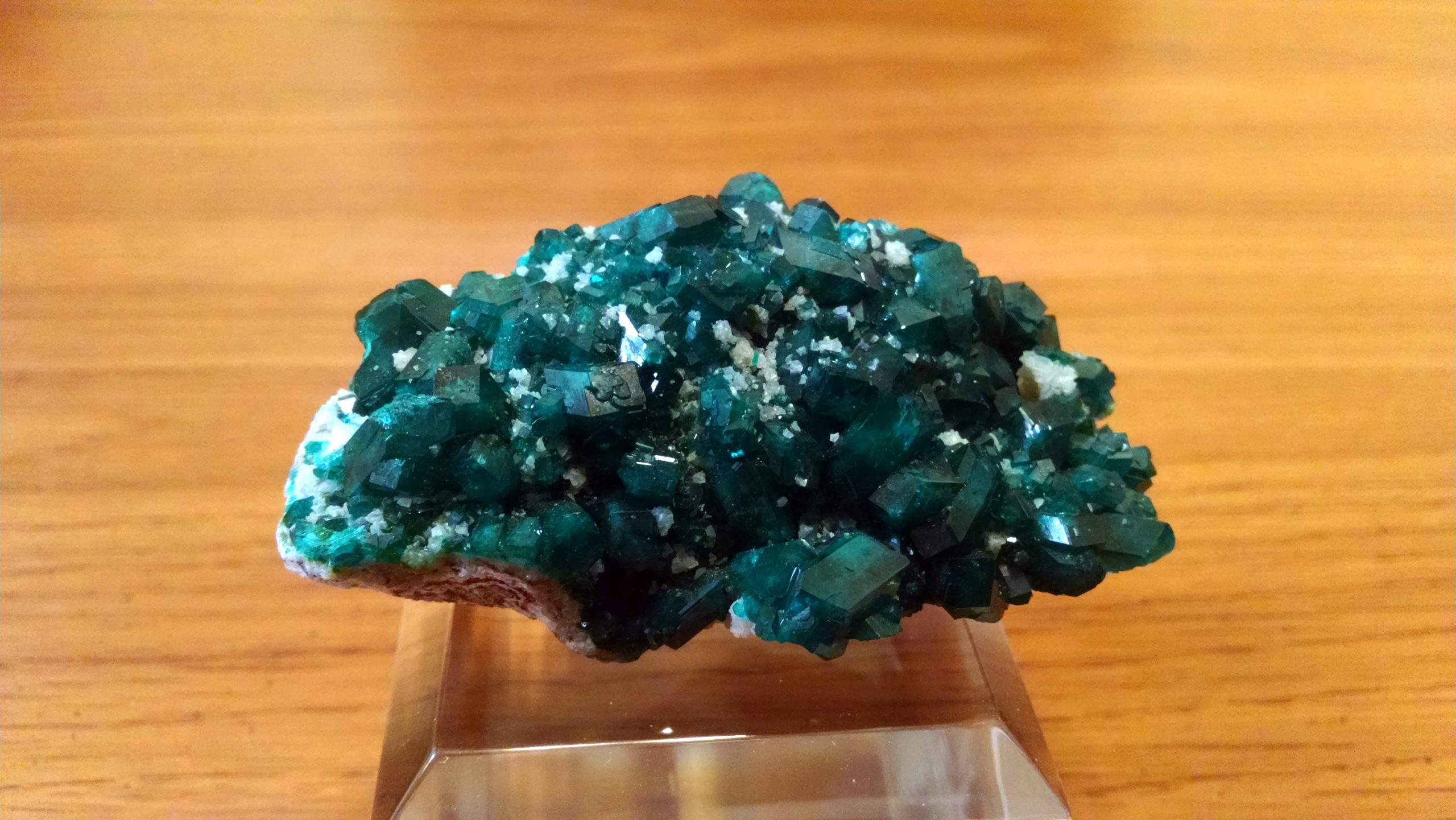 Dioptase is an intense emerald-green to bluish-green copper Cyclosilicate mineral. It is transparent to translucent. Its luster is vitreous to sub-adamantine. It has a hardness of 5, the same as apatite. Its specific gravity is 3.28–3.35, and it has two perfect and one very good cleavage directions. Additionally, dioptase is very fragile and specimens must be handled with great care. Crystal Class is Hexagonal Rhombohedral (Trigonal), forming 6-sided crystals that are terminated by rhombohedra.

History: Dioptase was used to highlight the edges of the eyes on the three Pre-Pottery Neolithic B lime plaster statues discovered at ‘Ain Ghazal known as Micah, Heifa and Noah. These sculptures date back to about 7200BC.
Late in the 18th century, copper miners at the Altyn-Tyube (Altyn-Tube) mine, Karagandy Province, Kazakhstan thought they found the emerald deposit of their dreams. They found fantastic cavities in quartz veins in a limestone, filled with thousands of lustrous emerald-green transparent crystals. The crystals were dispatched to Moscow, Russia for analysis. However the mineral’s inferior hardness of 5 compared with emerald’s greater hardness of 8 easily distinguished it. Later Fr. René Just Haüy (the famed French mineralogist) in 1797 determined that the enigmatic Altyn-Tyube mineral was new to science and named it dioptase (Greek, dia, “through” and optima, “vision”), alluding to the mineral’s two cleavage directions that are visible inside unbroken crystals.

Occurrence: Dioptase is an uncommon mineral found mostly in desert regions where it forms as a secondary mineral in the oxidized zone of copper sulfide mineral deposits. However, the process of its formation is not simple; the oxidation of copper sulfides should be insufficient to crystallize dioptase as silica is normally minutely soluble in water except at highly alkaline pH. The oxidation of sulfides will generate highly acidic fluids rich in sulfuric acid that should suppress silica solubility. However, in dry climates and with enough time, especially in areas of a mineral deposit where acids are buffered by carbonate, minute quantities of silica may react with dissolved copper forming dioptase and chrysocolla.
The Altyn Tube mine in Kazakhstan is the type locality and still provides handsome specimens; a brownish quartzite host distinguishes its specimens from other localities. The finest specimens of all were found at the Tsumeb Mine in Tsumeb, Namibia. Tsumeb dioptase is wonderfully lustrous and transparent, with its crystal often perched on an attractive snow-white carbonate matrix. Dioptase is also found in the deserts of the southwestern USA. A notable occurrence is the old Mammoth-Saint Anthony Mine near Mammoth, Arizona where small crystals that make fine micromount specimens are found. In addition, many small, pale-green colored crystals of dioptase have come from the Christmas Mine near Hayden, Arizona. Another classic locality for fine specimens is Renéville, Republic of Congo-Brazzaville. Finally, an interesting occurrence is the Malpaso Quarry in and near Agua de Oro Argentina. Here tiny bluish-green dioptase is found on and in quartz. It appears at this occurrence, dioptase is primary and has crystallized with quartz, native copper, and malachite.

Use: Dioptase is popular with mineral collectors and it is occasionally cut into small emerald-like gems. Dioptase and chrysocolla are the most common copper silicate minerals.