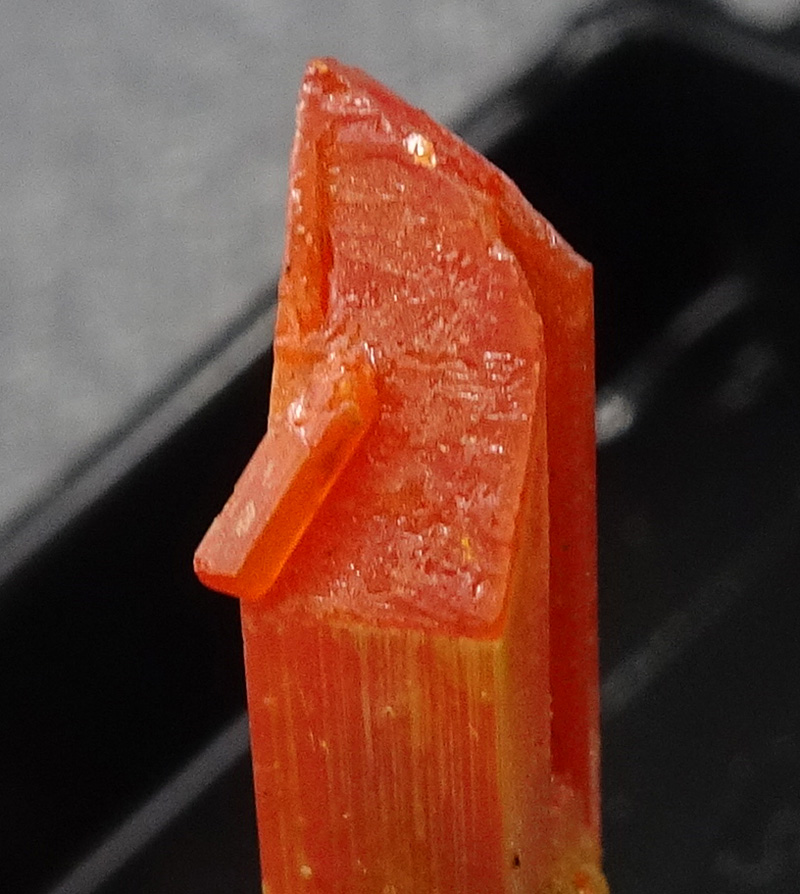 Crocoite is a lead chromate mineral (PbCrO 4 ). It is very popular with mineral collectors because of its brilliant red to reddish-orange to yellow color. Crocoite was first found in Russia and later in other European localities, but only sparingly and in typically small crystals. The Australian discovery on the island of Tasmania took this mineral to a whole
new level. For instance – large, brilliant, well-formed crystals found. These were larger and more abundant than any other localities ever found. Moreover, Crocoite is the state mineral of Tasmania, Australia.

Crocoite – The Beautiful Mineral of Lead, belongs to the Monoclinic Crystal System. This mineral is commonly found as crystals but most are poorly terminated. Crystals are elongated and prismatic, and almost always striated vertically. Large and single crystals are uncommon. Most often found as reticulated aggregates, acicular groupings, elongated needles, grainy, encrusting, and as disorganized groupings of small prismatic crystals. Crystals are
sometimes partially hollow. The luster of crocoite from Tasmania is adamantine to vitreous. Elsewhere, luster is usually resinous or waxy. Crocoite specimens are generally fragile as hardness is 2.5 to 3 on the Moh’s scale. The mineral is too soft and brittle for jewelry.

Subsequently, it is a relatively rare mineral. Specific conditions are required for its formation; an oxidation zone of lead ore deposits and the presence of ultramafic rocks serving as the source of chromium. Crocoite formation requires the Oxidation of chromium from chromite and decomposition of primary lead minerals. That is to say, these conditions are relatively unusual.

The Adelaide Mine and likewise, the Red Lead Mine in Dundas, on the island of Tasmania, Australia, is where Crocoite is most abundant, and where the most magnificent crystals have been found. Some 90% of specimens and crystals on the
market come from here.

The type locality for Crocoite is Berezovsk, Sverdlovsk Oblast, in the Ural Mountains of Russia. Other localities include Callenberg, Saxony, Germany; Nontron, France; Luzon in the Philippines; and Congonhas, Minas Gerais, Brazil. It also comes from the Australian mainland in the Happy Jack Mine, Menzies, Western Australia.

In the United States, subsequently, only small amounts found, usually only capable of being micro mounts. Occurrences include the Mammoth Mine, Tiger, Pinal County, Arizona; the El Dorado Mine, Indio, Riverside County, California; and Darwin, Inyo County, California.

(Book of Stones by Simmons and Ahsian): Above all, Crocoite is an extremely powerful stone that activates the root, heart, and crown chakras. In stimulating the root chakra, Crocoite increases physical vitality, assists one in feeling empowered in physical reality, and helps one manifest one’s needs and desires more easily.

Crocoite also activates the heart. It stimulates the heart’s electromagnetic field. It encourages a courageous and heroic heart, strongly radiating the frequencies of love and compassion.

As the root and heart activate, therefore, the crown chakra will become awakened. This allows for connection to the higher realms and the grounding of spiritual energy. The activation offered by Crocoite is a powerful experience of awakening to one’s true potential and purpose.

Meet others by joining our Facebook and Instagram pages, learn more about Crocoite at mindat.org. Visit our mineral dealers here.