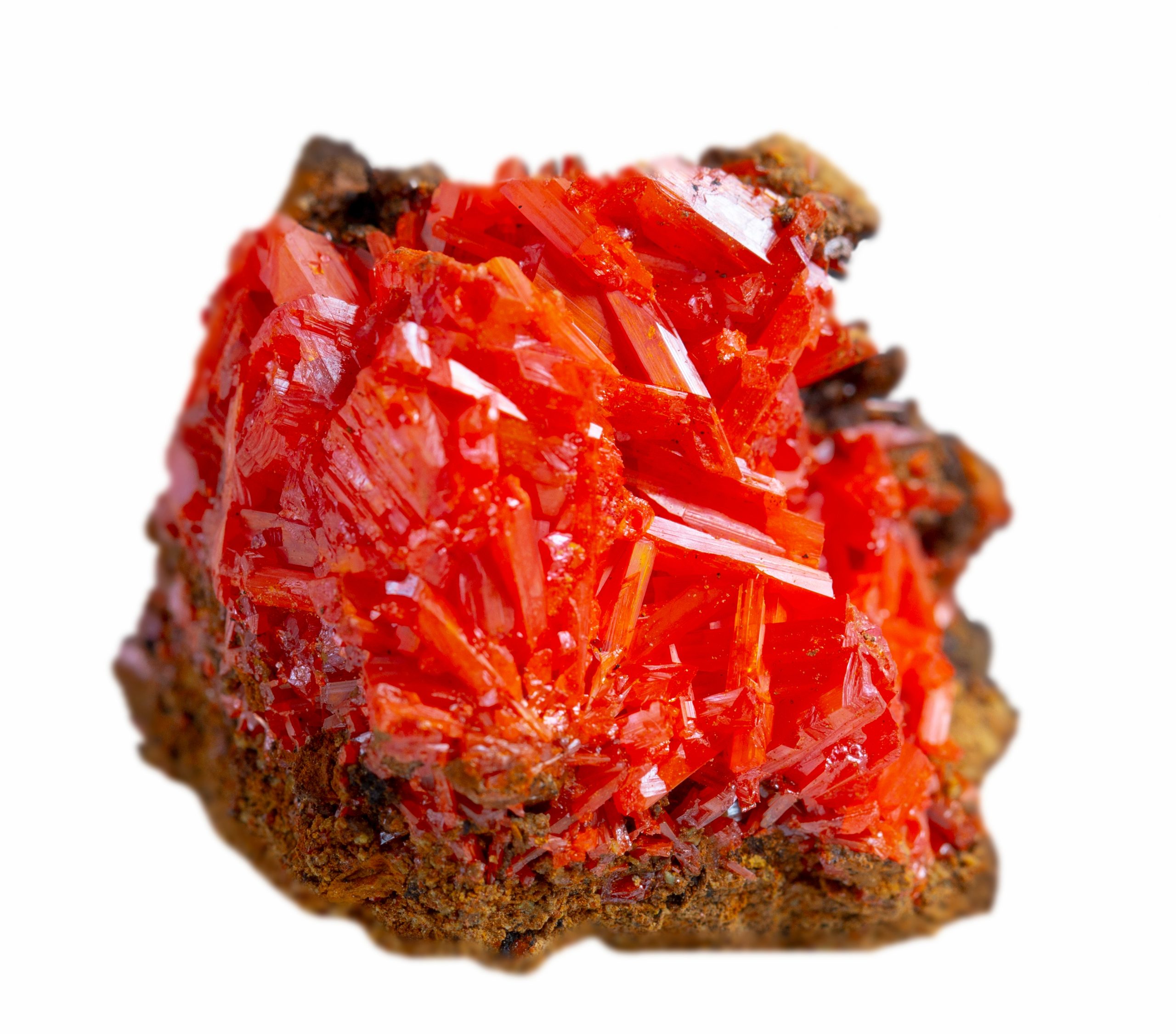 Wulfenite is the state mineral of Arizona. It is a favorite among mineral collectors. It forms outstanding crystals and aggregates in vibrant colors that few minerals can match. In addition, the mineral forms a series with the rarer mineral Stolzite, which contains tungsten in place of the molybdenum. This spectacular crystal naming is in honor of Austrian mineralogist Franz Xavier von Wulfen.

Wulfenite is a rare mineral formed by the weathering (oxidation) of hydrothermal lead deposits. Most Often found as thin tabular (blades) crystals with a square or octagonal shape and very narrow mid-section. Crystals can be very flaky and fragile and are often in platy aggregates. It may also appear in long-angled bipyramids, dipyramids, pinacoids, and as thick, cube-like blocks.

This remarkable mineral occurs in many colors such as bright yellow, red, orange, orange-red, and butterscotch; sometimes grey, brown, olive-green, and even black. Pure wulfenite is colorless but rare. Consequently, the yellow and red color of this mineral is thought to be caused by small traces of chromium. Others have suggested that perhaps the molybdate contributes to wulfenite’s yellow color. In a few localities, It may display as fluorescent: dark yellow or orange in shortwave UV light, and dark orange to red in longwave.

Wulfenite crystallizes in the Tetragonal system, Dipyramidal class. Hardness is 2.5 – 3 on the Moh’s scale. Luster is adamantine to resinous. Moreover, it is a minor ore of lead and molybdenum.

Most collector specimens of Wulfenite come from northern Mexico and the southwestern United States. However, there are several exceptional worldwide localities for Wulfenite. The type locality of Wulfenite, known for producing thin orange octagonal-shaped crystals, is Bad-Bleiberg, Carinthia, Austria. A short distance across the border, in Slovenia, a similar occurrence exists at the mines in Mount Peca near Mežica. The crystals are yellow, often with well-developed pyramids and bipyramids. In 1997, the crystal was depicted on a stamp by the postal service of Slovenia.

In addition, brilliant thin plates of Wulfenite of exceptional quality come from the Jianshan Mine, Xinjiang Province in China. Iran has produced excellent, blood-red crystals at the Chah-Kharboze Mine, Anarak Province.

Thin, platy clusters come from Mibladen (at the Adeghoul and Les Dalles Mines) and Touissit, Khénifra Province, Morocco. Thick, stocky crystals come from M’fouati, in the Congo. A classic locality that produced crystals of Wulfenite with a lighter color than other occurrences is Tsumeb, Namibia.

There are many important specimen-producing localities in Mexico. The best are from three main locations. First, are thick blocky crystals Villa Ahumada, Sierra De Los Lamentos, Chihuahua. Second, thin transparent yellow crystals from the San Francisco Mine, near Cucurpe, Sonora. Third, are elongated rectangles and tapering prisms often associated with green Mimetite. These are from the Ojuela Mine, Mapimi, Durango.

Additionally, In the United States, virtually all notable Wulfenite localities are in the state of Arizona. Strikingly bright, red to reddish-orange crystals are world-famous from the Red Cloud Mine in the Trigo Mountains, La Paz County. Tabular, orange to yellow Wulfenite came from the Rowley Mine, near Theba, Maricopa County; and lustrous crystals from the Old Yuma Mine, Tucson Mountains, Pima County. In addition, Glassy, gemmy crystals have come from the 79 Mine, Hayden, Gila County. Nearby at the Finch Mine is a unique habit of Quartz and Chalcedony coating the Wulfenite. Tabular, platy crystals came from the Mammoth-Saint Anthony Mine, Tiger, Pinal County; and the Glove Mine, near Amado, Santa Cruz County. Dense, tabular clusters of Wulfenite were found in the Defiance Mine, Gleeson, Cochise County; and an old-time Wulfenite occurrence is the Hilltop Mine, Rustler Park, Cochise County.

However, outside of Arizona, Wulfenite is not common in the United States. Thick clusters come from the Stephenson-Bennett Mine, Doña Ana County, New Mexico. Paper-thin crystals were mined at the Tecoma Mine, Lucin, Box Elder County, Utah. Lesser-known localities of Wulfenite occur in Colorado: the Sherman Tunnel, St. Peter’s Dome, Tincup-Tomichi-Moncarch mining districts, Pride of America mine in Hinsdale County, and the Bandora mine in San Juan County.

(from Book of Stones by Simmons and Ahsian)
Wulfenite is highly attuned to the Earth. One can easily come into resonance with the planet’s core vibration or energetic heartbeat. The energy of Wulfenite can assist in artistic creation. It stimulates both inspiration and persistence, assisting one in carrying out even the most ambitious projects through to completion. A stone of originality, bringing new ideas and visions for painting, music, poetry, and other art forms.

Wulfenite helps one feel inspired and energized so pessimism, procrastination, or self-defeating attitudes can be overcome. The mineral stimulates metabolism, enhances sexual function and enjoyment, and promotes physical activity.