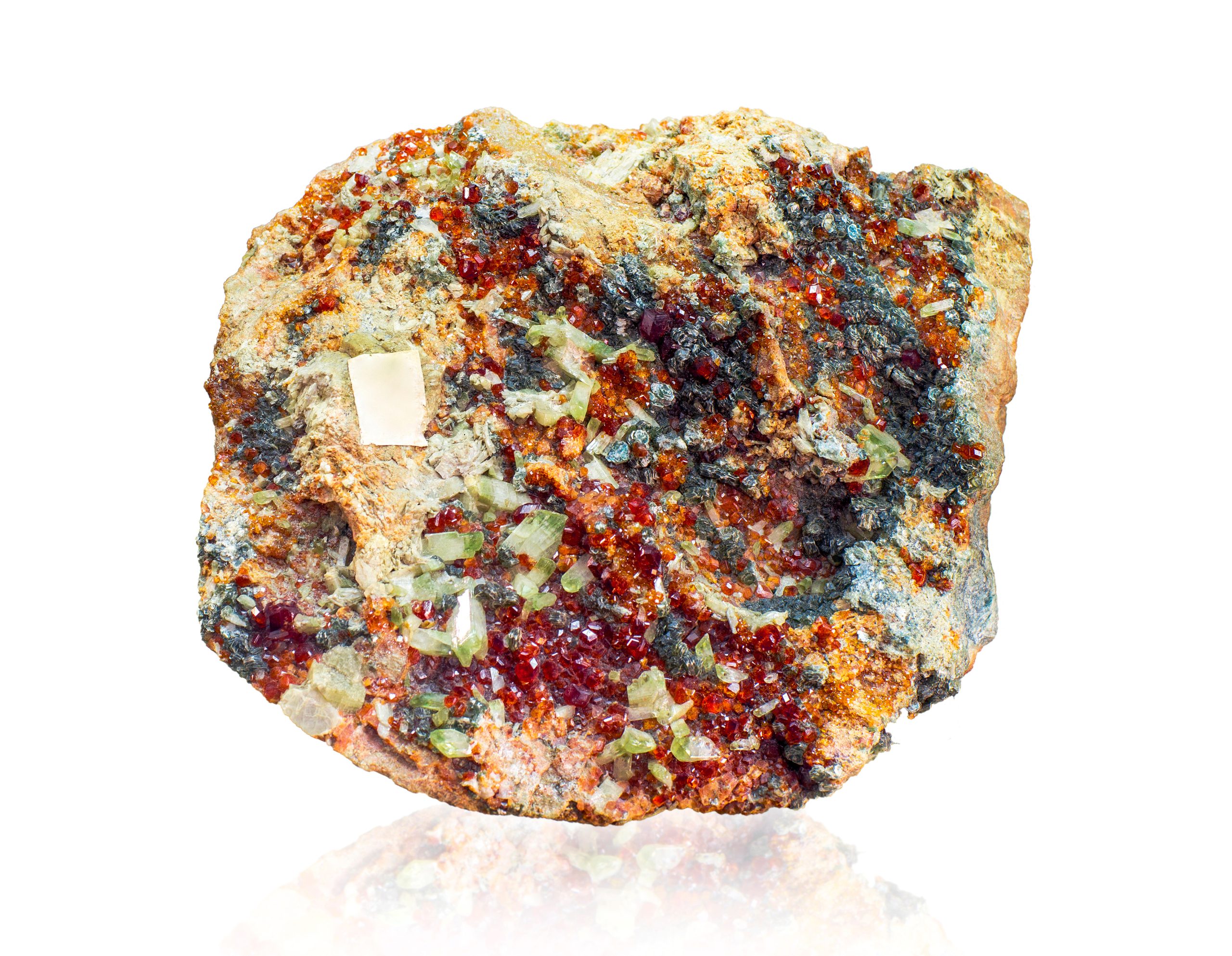 Grossular is a calcium aluminum silicate mineral. It is a member of the Garnet Group of minerals. Grossular Garnet is the state gemstone of Vermont. The name grossular is derived from the botanical name for the gooseberry, grossularia, in reference to the green color of the garnet originally found in Russia. Grossular has several well-known varieties: Tsavorite (emerald green), Hessonite (orange to orange-brown), and Rosolite (pink to raspberry-red). Transvaal Jade is the name used for massive veins of opaque Grossular Garnet that resembles Jade. It is white to light green in color and is found in South Africa.

Properties and Color of Grossular Garnet

Grossular garnets are found in almost every color except blue. The primary colors are green, brown, orange, yellow-green, and gray. Less often in pink, red, and yellow. Rarely white, and colorless. The variance in colors is from trace elements (less than 1%) that are substituted for calcium or aluminum. For example, the green color of Tsavorite is due to vanadium which substitutes for aluminum in the crystal structure. Chromium and iron are other trace elements that affect color in Grossular.

Grossular usually forms in sharp dodecahedral crystals and aggregates. Crystals often have growth patterns, etchings, and striations. It occasionally forms in trapezohedral crystals or trapezohedral-dodecahedral modifications. It also forms massive and dense growths of tiny crystals. Grossular is found in contact metamorphic rocks in skarns and hornfels and in asbestos serpentine deposits.

Physical Properties: Hardness is 6.5 – 7.5 on the Moh’s Scale. Grossular belongs to the Isometric Crystal System, Hexoctahedral Class. Grossular has no cleavage. Luster is greasy to vitreous. Grossular is occasionally fluorescent in ultraviolet light; weak orange to yellow-orange.

Noteworthy Localities: Grossular has many good localities worldwide. Italy is famous for its many Grossular occurrences, especially the Hessonite variety; noteworthy Italian localities include the Val D’Ala; where it occurs with outstanding Diopside; Condove, Val D’Susa; Bellecombe, in the Val D’Aosta; Carboneri, in the Val D’Pellice; and Urbe, Savona Province. Other European localities are Felskinn, Saas Fee, Wallis, Switzerland; and the Ocna de Fier-Dognecea District, Banat Mountains, Romania.

In Mexico, exceptionally large crystals and clusters are found near Lake Jaco, in Sierra de la Cruz, Coahuila. Most crystals are beige to light-greenish-gray, though a very attractive raspberry-red form is found there as well.

Perhaps the most outstanding locality of Grossular is the Jefferey Mine in Asbestos, Québec, Canada. This mine was famous for its lustrous transparent brown Hessonite crystals, as well as its chromium-rich deep green form. Other occurrences in Québec include the Thetford Mines and nearby Black Lake, which produce deep green chromium-rich crystals; and the Orford Nickel mine, St-Denis-de-Brompton, where electric green microcrystals embedded on Diopside were found.

Metaphysical Properties (from Book of Stones by Simmons and Ahsian): Grossular Garnet is the healing of all limitations on the physical level – whether they affect health or wealth. Tsavorites especially can open and cleanse the heart chakra, enhance vitality, increase zest for living, induce feelings of charity and benevolence and help one to align with and bring about the heart’s desires. Physically, Grossular Garnet supports general recovery from illness or trauma. It assists the body in regeneration and so is an excellent stone for use during and after surgery.