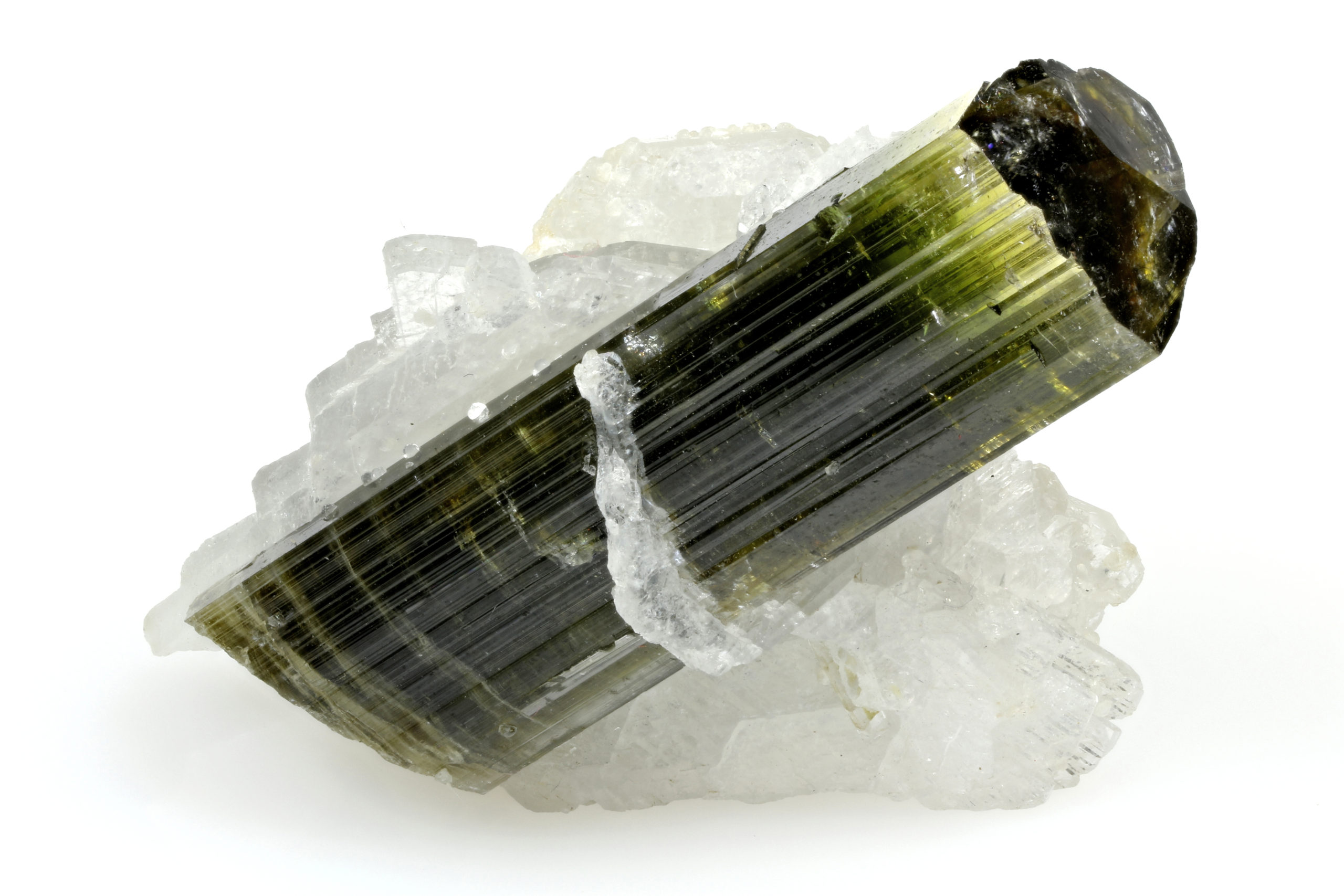 Tourmaline is a birthstone for October, along with opal. “Tourmaline” is the name of a large group of boron silicate minerals. These minerals share a common crystal structure (Trigonal) and similar physical properties but vary tremendously in chemical composition. They share the elements silicon, aluminum, and boron, but contain a complex mixture of other elements such as sodium, lithium, calcium, magnesium, manganese, iron, chromium, vanadium, fluorine, and sometimes copper. Tourmaline is
perhaps the main repository for boron in the earth’s crust. Hardness is 7-7.5 on the Mohs Scale.

Tourmaline is the world’s most colorful gemstone. A tourmaline’s chemical composition directly influences its physical properties and is responsible for its color. However, color is a poor method to correctly identify a tourmaline. You can’t just look at the color and know what it is.

Zoning in tourmalines is common, not only from top to bottom but also from the core outward. Some of this zoning is obvious in transparent and translucent crystals and is one of the reasons why collectors are so attracted to them. The more vivid the color change and the more colors a tourmaline crystal has, the more desirable it is to collectors. Opaque tourmalines, commonly the black and brown ones, also can have significant compositional zoning. Tourmaline has a prismatic crystal habit and often has obvious striations that parallel the long axis of a crystal. Tourmaline crystals often have triangular or six-sided cross-sections with rounded edges.

Likewise, there are 38 minerals in the tourmaline group of boron silicate minerals recognized by the International Mineralogical Association based upon the chemical composition of solid solution series end members. The major tourmaline species are elbaite, liddicoatite, dravite, uvite, and schorl.

Liddicoatite is a calcium lithium tourmaline species. Colors include light-brown, pink to red, green, and blue.

Uvite is a calcium magnesium aluminum tourmaline species. As a result, the colors are mostly deep green or brown.

Tourmalines are found in many geological settings all over the world. Pegmatites produce most of the crystal specimens cherished by collectors but tourmalines are also commonly found in granites and in metamorphic rocks like schist, shale, marble, conglomerate, lodestone, and limestone. They are also found in sedimentary rocks because of their hardness and resistance to chemical weathering.

Brazil has been the world’s leading source of tourmaline for nearly 500 years. Since the late 1800’s, millions of carats of tourmaline have been produced from the pegmatite deposits of Minas Gerais, Brazil.

Recent discoveries of tourmaline of various kinds are made in Afghanistan, Mozambique, Namibia, Nigeria, Pakistan, Tanzania, and other countries.

Tourmaline is one of the most popular gemstones because it occurs in every color of the spectrum. Jewelers and gemologists use trade names for different colors of tourmaline to simplify discussions with their customers.

Paraíba is an intense violetish blue, greenish-blue, or blue tourmaline from the state of Paraíba, Brazil.

Chrome tourmaline is intense green. In spite of its name, it’s colored mostly by vanadium, the same element that colors many Brazilian and African emeralds.

Watermelon tourmaline is pink in the center and green around the outside. As a result, crystals of this material are typically cut into slices to display this special arrangement.

Cat’s Eye Tourmaline is a tourmaline (of any species) showing chatoyancy.
Verdelite is a green variety of tourmaline.

(Book of Stones from Simmons and Ahsian)

Tourmaline is one of the most significant mineral groups for metaphysical use. Therefore it includes a wide variety of different forms, colors, and energy spectrums. Schorl (black tourmaline) has the ability to transmute and purify negative energy by turning it into usable energy. It is used to counter excessive stress, worry, or obsessive behavior. It helps purify the body of toxins and waste.

Pink tourmaline supports emotional healing and the activation of the heart chakra. Likewise, it stimulates feelings of joy, happiness, and relaxation. It helps calm and soothe the heart.

Rubellite (red tourmaline) combines the energies of the Water and Earth elements. As a result, this variant helps one overcome fears about abundance, survival, stability, and safety, as it soothes the emotional body and opens the heart. It assists one in finding the emotional strength to move out of difficult relationships and other types of emotional hardship. It soothes the nervous system and can help heal hysteria, depression, and obsessiveness.

Green tourmaline is a powerful healing stone. In other words, it helps calm the emotions and facilitates the proper flow of healing energy through the body. It can help one to become less inhibited and more expressive. It is useful in countering fear of change and the over-regulation of one’s life and habits.

Indicolite (blue tourmaline) is an advanced healing tool due to its ability to activate higher awareness while inducing a state of detachment. It helps one understand the root cause of emotional trauma or imbalance.

Dravite (brown tourmaline) pairs the purifying energies of schorl with the heart-healing energy of green tourmaline. Additionally, it aids in finding emotional strength and a sense of self-acceptance. It initiates deep healing for those who have experienced emotional trauma.