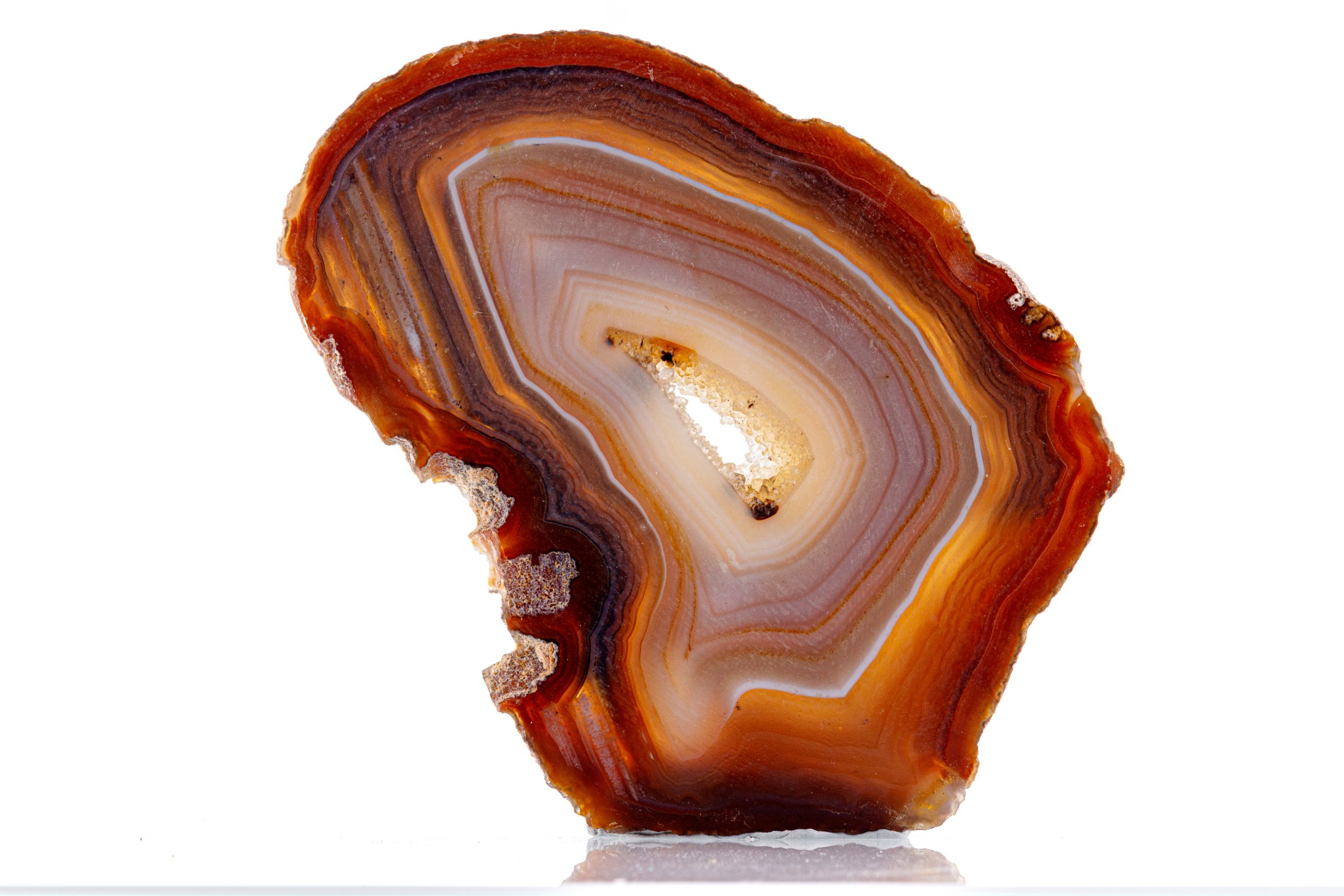 Agate is the banded variety of Chalcedony which is the microcrystalline variety of Quartz (silicon dioxide). Therefore, these are called the banded wonders of Nature. Agate is found in a wide variety of colors (Green, Blue, Red, Black, Purple, White, Yellow, Pink, Grey, Orange, or Brown). Subsequently, the trace elements mixed with the silica in the Agate will usually determine the colors.

Layers are deposited on the walls of the cavity and as a result, slowly working their way inwards. Variations in the character of the solution or in the conditions of deposition may cause a corresponding variation in each of the succeeding concentric layers. As a result, Agate is very durable (hardness of 6.5 -7).

Therefore, it is often seen detached from its softer eroding matrix. After the separation, the outer surface of the Agate is usually pitted and rough from filling the cavity of its former matrix. Agates are found in sedimentary rocks, normally in limestone or dolomite.

These sedimentary rocks form cavities often from decomposed branches or other buried organic material. Silica-rich fluids then replace the organic material and agates can be formed.

Agatized Coral – In other words, a variety of agate/chalcedony replacing coral.

Bird’s Eye Agate – Similarly this is a variety of eye agate where the eyes are supposed to resemble the eyes of a bird.

Dendritic Agate – Translucent Chalcedony with tree-like or fern-like inclusions. However, dendritic Agate is technically not a true Agate, as it lacks the banding patterns exhibited in Agates.

Dryhead Agate – Agate from Montana with orange and brownish banding.

Fire Agate – Form of Agate or Chalcedony that is iridescent with a play of colors or “fire” similar to that of Opal. Fire Agates usually have botryoidal bubbles included in their interior. The play of color is caused by the inclusions of Goethite or Limonite.

Fortification Agate – Agate with sharp-angled bands which have been found to resemble the outlines of fortifications of a castle.

Fossil Agate – In other words, Agate as a replacement material in fossils.

Grape Agate – A botryoidal form of purple chalcedony. Not an agate. Usually from Indonesia.

Iris Agate – An iridescent variety of agate. When sliced into a thin section it exibits all the colors of the spectrum when viewed in transmitted light.

Lake Superior Agate – Believed to be the world’s oldest agates, over 1 billion years old, these are found throughout the northern US having been spread from the original Lake Superior region by glaciation. It has generally pale coloring.

Landscape Agate – Agate that resembles a scenic landscape such as mountain formations.

Mocha Stone – A variety of agate (chalcedony) is found containing inclusions of pyrolusite.

Mojave Blue Agate – Agate with a light pastel blue or blue-gray color is from the Mojave Desert in California.

Moss Agate – Chalcedony containing dense inclusions of green Hornblende that cause the pattern to resemble moss. Therefore, Moss Agate is not true Agate as it lacks the banding patterns of Agate.

Onyx – Form of Agate/Chalcedony with a solid black color or white and black banding. Occasionally also refers to banded Travertine or Tufa in the mineral form of Calcite or Aragonite with black and white bands.

Oregon Snakeskin Agate – White to cream Agate or Chalcedony with a wrinkled or cracked “skin”, resembling the skin of a snake; found in Oregon.

Pigeon Blood Agate – A blood-red and white variety of agate from Utah.

Queensland Agate – Distinct form of Agate from Agate Creek has been found in Queensland, Australia.

Sagenite Agate – Agate with acicular or pointed inclusions of various minerals. These hair-like formations are often arranged in fans or bursts.

Sardonyx – A variety of Agate with reddish-brown and either black or white bands.

Snakeskin Agate – Agate with a scale-like layer that resembles the skin of a snake. Also refers to a reddish brown Agate with small black concentric bands.

Sowbelly Agate – Bands of purple Amethyst and white Chalcedony with dendritic native silver. Has been found from the Last Chance Mine near Creede, Mineral County, Colorado.

Thunder Egg – Rounded nodule filled with Agate in the center.

Tube Agate – Agate with tube-like formations which are sometimes hollow.

The first worked Agate deposits is from Idar-Oberstien, Germany, which has long since been commercially worked out. One of the most abundant sources of Agate today is the Rio Grande do Sul in Brazil, where many different sizes and types occur. These Agates are sometimes dyed.

Other outstanding South American localities are San Rafael, Mendoza Province, Argentina; and Artigas, Uruguay. Mexico has several famous Agate sources in Chihuahua, the most important being Ojo Laguna, Moctezuma, and Rancho Coyamito. A well-known Agate deposit in Australia is Agate Creek, in Queensland. Poland has some good Agate deposits in the Kaczawski Mountains at Nowy Kosciol and Ploczki Gorne.

In the United States, fine Agate is from the Dryhead Agate Mine, Carbon County, Montana; Fairburn, Custer County, South Dakota; Baker Ranch, Luna County, New Mexico; and from the shores of Lake Superior in the Keweenaw Peninsula of Michigan.

Thunder Egg Agates are abundant from Jefferson County, Oregon. For instance, the finest iridescent Fire Agate comes from the Black Hills, Graham County, Arizona; and in Mexico in Aguascalientes. Sowbelly Agate is from the Last Chance Mine near Creede, Mineral County, Colorado.

In general, Agate enhances mental function, improves concentration, and enhances the perception and analytical abilities. A soothing and calming gemstone that heals inner anger, anxiety and is found to help in the strengthening of relationships. Agate instills security and safety. Each variety of Agate has its own metaphysical properties.

Above all, Agate is excellent for balancing emotional, physical, and intellectual energy, and in harmonizing yin and yang, the positive and negative forces of the universe. [Hall]

Agate, therefore, stabilizes the aura, eliminating and transforming negative energies. Its cleansing effect is powerful at all levels. [Melody]

Moreover, Agate is beneficial in self-analysis and uncovering hidden circumstances that might interfere with well-being. It promotes self-acceptance and confidence, encouraging the speaking of one’s own truth. In addition, Agate overcomes negativity and bitterness of the heart, by healing anger, fostering love, and lending the courage to start over. It has been found useful for any kind of trauma. [Hall]