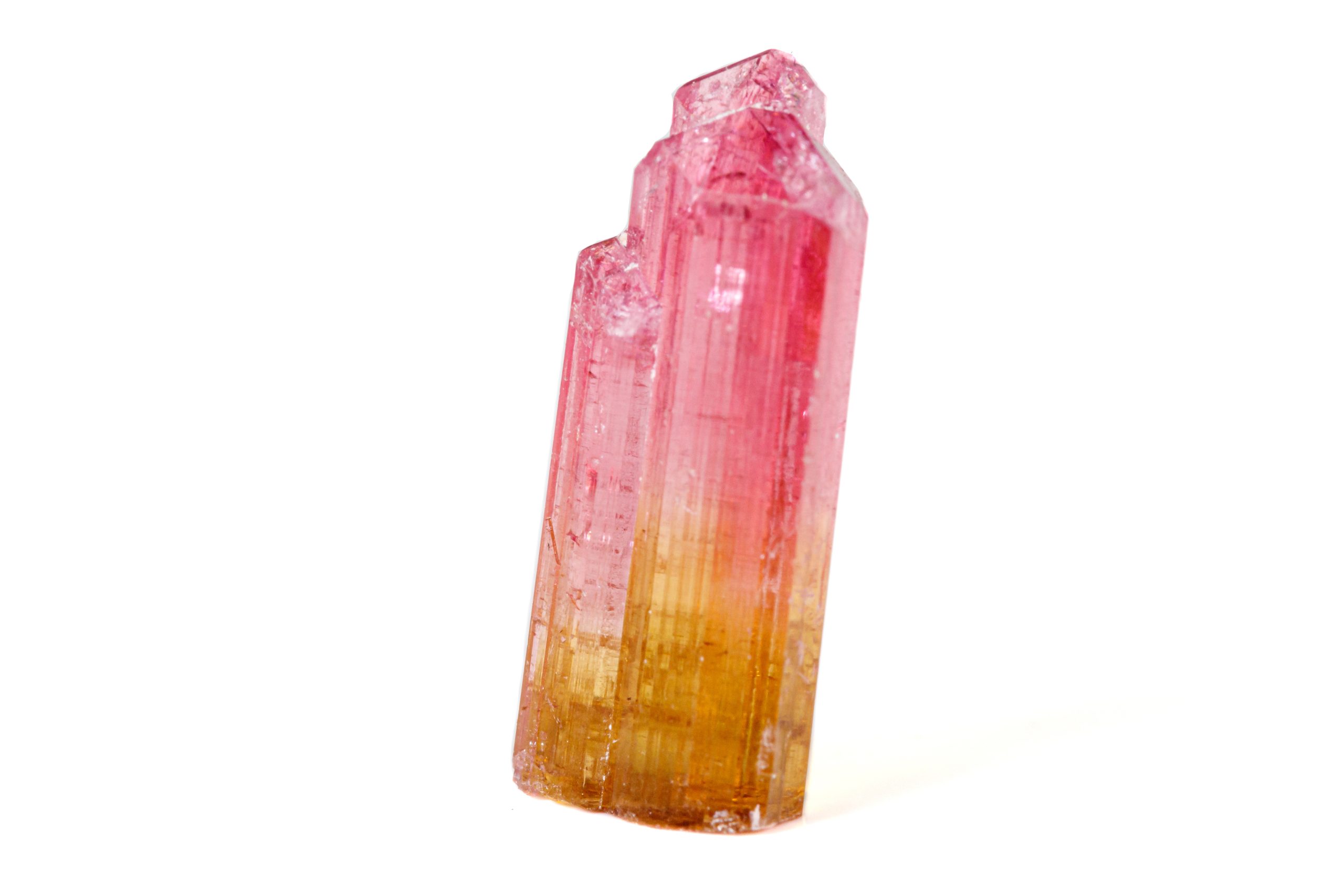 Elbaite (Watermelon, Indicolite, Rubellite) is the most colorful member of the Tourmaline Group of minerals. Elbaite is often cut as a gemstone, sliced into colorful cross-sections or simply appreciated as natural specimens by millions of rock collectors. Elbaite tourmaline is considered by collectors as one of the top five most valuable and sought-after mineral species. Elbaite is named after the type locality, the island of Elba, Italy.

Elbaite is a sodium, lithium, aluminum boro-silicate hydroxide mineral. It forms three series: with Dravite, with Liddicoatite, and with Schorl. Due to these series, specimens with the ideal end-member formula are rarely found occurring naturally. Common trace elements (which influence color) include iron, manganese, copper, titanium, fluorine and lead.

Elbaite is one of the most varied minerals in terms of color. Colors include green, red, pink and blue. White, colorless, black, brown, yellow, orange, and purple colors are less common. Crystals are frequently multicolored, containing two or more distinct colors. Many green and blue specimens are strongly pleochroic. When viewed through their vertical axis, such specimens appear darker in color than when seen through their horizontal axis. Certain Elbaites exhibit a cat’s eye effect when polished into cabochons.

Elbaite (Watermelon, Indicolite, Rubellite) belongs to the Trigonal Crystal System, Ditrigonal pyramidal Crystal Class. Hardness is 7.0 – 7.5 on the Moh’s Scale. Specific Gravity is 2.9 – 3.0. Luster is Vitreous to Resinous. Crystals are usually found as elongated prismatic crystals that are heavily striated. Also as short, stubby prismatic crystals. Most Elbaite crystals have a rounded, triangular cross-section. Seldom in tabular crystals. Aggregates include columnar, radiating, botryoidal, in dense groups of tiny, elongated needles, and in compact masses. Crystals may be curved or warped, and in some cases may have their growth interrupted by host rock with the same crystal appearing in two parts of a matrix. The best field indicators are crystal habit, triangular cross-section, color and hardness. Elbaite forms in igneous and metamorphic rocks associated with granite pegmatites characterized by hydrothermal replacement.

Blue Cap Tourmaline – Variety of Elbaite with its top portion having a dark blue color, with the rest of the body having a red or pink color.

Fluor-Elbaite – form of Elbaite where part of the hydroxyl is replaced with fluorine. Although Fluor-elbaite was known for some time, it was only recognized as a distinct mineral species by the IMA in 2011.

Moor’s Head Tourmaline – Lightly tinted, transparent Elbaite Tourmaline with a black top that is well known from the island of Elba, Italy.

Mushroom Tourmaline – Elbaite from Myanmar with an odd-shaped fan-like protruding botryoidal growth off the top of a crystal that resembles the formation of a mushroom.

Paraiba Tourmaline – Neon blue variety of Elbaite that originated in Paraiba, Brazil. Its interesting color is caused by inclusions of copper.

Watermelon Tourmaline – Variety of Elbaite that is green on the outside and red on the inside.

Among the most noteworthy sources of Elbaite (Watermelon, Indicolite, Rubellite) is the state of Minas Gerais, Brazil, where outstanding forms and colors are found in numerous pegmatite localities. Notable locality names in Minas Gerais include Aracuai, Barra do Salinas, Conselheiro Pena, Golconda, Governador Valadares, Itambacuri, Ouro Preto, Sao Jose do Safira, Taquaral, and Virgem de Lapa. A very popular yet rare neon blue Elbaite, called Paraiba Tourmaline, came from the Paraiba Mine in Sao José da Batalha, Paraiba, Brazil; and distinctly beautiful raspberry to ruby-red Elbaite var. Rubellite from the Jonas Mine, Itatiaia, Minas Gerais, Brazil. An outstanding producer of some of the highest quality collector crystals of Elbaite, with especially prominent terminations, is the Pederneira Mine in Sao Jose do Safira.

Afghanistan is also known for its outstanding Elbaite, especially at the mine fields of Paprok and Mawi in Nuristan, Kunar Province. Excellent Elbaite comes from the mountains of Northern Pakistan at Stak Nala, Skardu, Gilgit District. An odd, radiating botryoidal mushroom-shaped Elbaite (“Mushroom Tourmaline”) comes from Mogok, Myanmar, often in a pink to deep red color. An important Russian locality, which is producing a dark red Elbaite, is the Malkhan Pegmatite, Transbaikalia, in Siberia.

The type locality for Elbaite, where this mineral was first described, is on the island of Elba, Italy, in the deposits of San Piero in Campo and nearby Sant’Ilario in Campo. These deposits have produced very old historic Elbaite, especially the classic Moor’s Head Tourmalines with black caps.

In 1994, a major locality was discovered in Canada, at O’Grady Lakes in the Yukon.

In the United States, Southern California produces some of the most outstanding Elbaite. The most important locality is Pala, San Diego County, where the specific deposits are the Tourmaline King Mine, the Tourmaline Queen Mine, the Stewart Mine, the Pala Chief Mine, and the Elizabeth R. Mine. The Himalaya Mine, in nearby Mesa Grande, is also a world-famous Elbaite producer. Other important Southern California localities in San Diego County include the Little Three Mine, Ramona; and the Cryo-Genie Mine, Warner Springs.

On the East Coast of the United States, in New England, are some of the classic and famous Tourmaline quarries. Most noteworthy is the state of Maine, which has several important deposits, the most famous being the Dunton Quarry, Newry; and Mt. Mica, Paris, both in Oxford County; and Mt. Apatite, in Auburn, Androscoggin County. In Connecticut, fine green Elbaite once came from the Gillette Quarry, Haddam, Middlesex County.

For more information about Elbaite, visit mindat.org or join our Facebook group to network with others of like minds. Visit us on Instagram and/or join us at our Gem and Mineral shows.