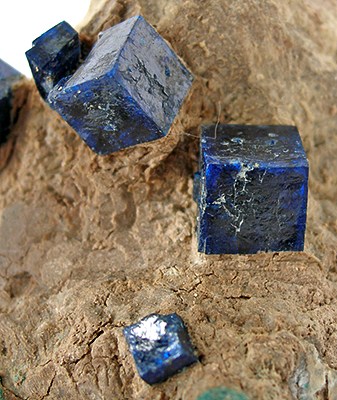 Boleite (a silver, copper, and lead mineral) is a rare, highly attractive blue mineral. It is categorized as a complex halide mineral. The chemical composition is hydroxy chloride of potassium, lead, silver, and copper. This mineral was named after its place of discovery, the El Boleo mine, on the Baja Peninsula, near Santa Rosalia, Mexico. Collectors are attracted to Boleite’s indigo blue color and unique crystal habit. It is of great interest to collectors of twins, silver minerals, and rare halides.

Properties and Color of Boleite

Boleite is generally listed as belonging to the Isometric Crystal System. However, other sources make a compelling argument that Boleite is a Tetragonal mineral. It is found most often as cubic crystals, which can be perfectly shaped. Crystals may have modified octahedral faces or corners.

Twinning is evident as pseudocubic penetration twinning along with three different angles perpendicular to one another. Boleite is also found in intergrown cubic crystals, and in clusters of cubic crystals. Boleite is associated with two other rare halide minerals cumengite and pseudoboleite. These halides have similar chemistries to boleite and often form attached to the boleite crystals as epitaxial overgrowths. (Crystal growth where one mineral forms above the existing crystal face of another crystal in symmetric sequence). The cumengite/boleite combination crystal can form six-pointed, 3-dimensional star shapes which may resemble a Star of David. Epitaxial overgrowths of cubic Pseudoboleite on Boleite crystal faces form a cube with protruding rectangular faces on each of the six sides.

Physical Properties: Hardness is 3-3.5 on the Moh’s Scale. Luster is vitreous to pearly. It is not fluorescent. Individual crystals are rarely longer than 2 cm. This mineral is found in the oxidation zone deposits of copper and lead usually in sedimentary environments.

Noteworthy Localities: The premier locality for Boleite, which is also the type locality, is the Amelia Mine, Boleo District, Santa Rosalia, Baja California Sur, Mexico. This is the only area where Boleite occurs as relatively large crystals.

Metaphysical Properties: Since ancient times, there are cultural beliefs that Boleite crystals are believed to heal afflictions in human beings. Beyond their everyday use of beautification in ornaments and decoration, a dedicated therapy involves using crystals for healing chronic ailments. This practice which utilizes Boleite healing properties is known as crystal healing. Certain crystals are believed to be associated with prominent planets and channel the energies from these planets into the wearer’s body. This crystal helps give you courage, allowing you to function in those circumstances where courage is needed without feeling the fear that would normally accompany such a situation.