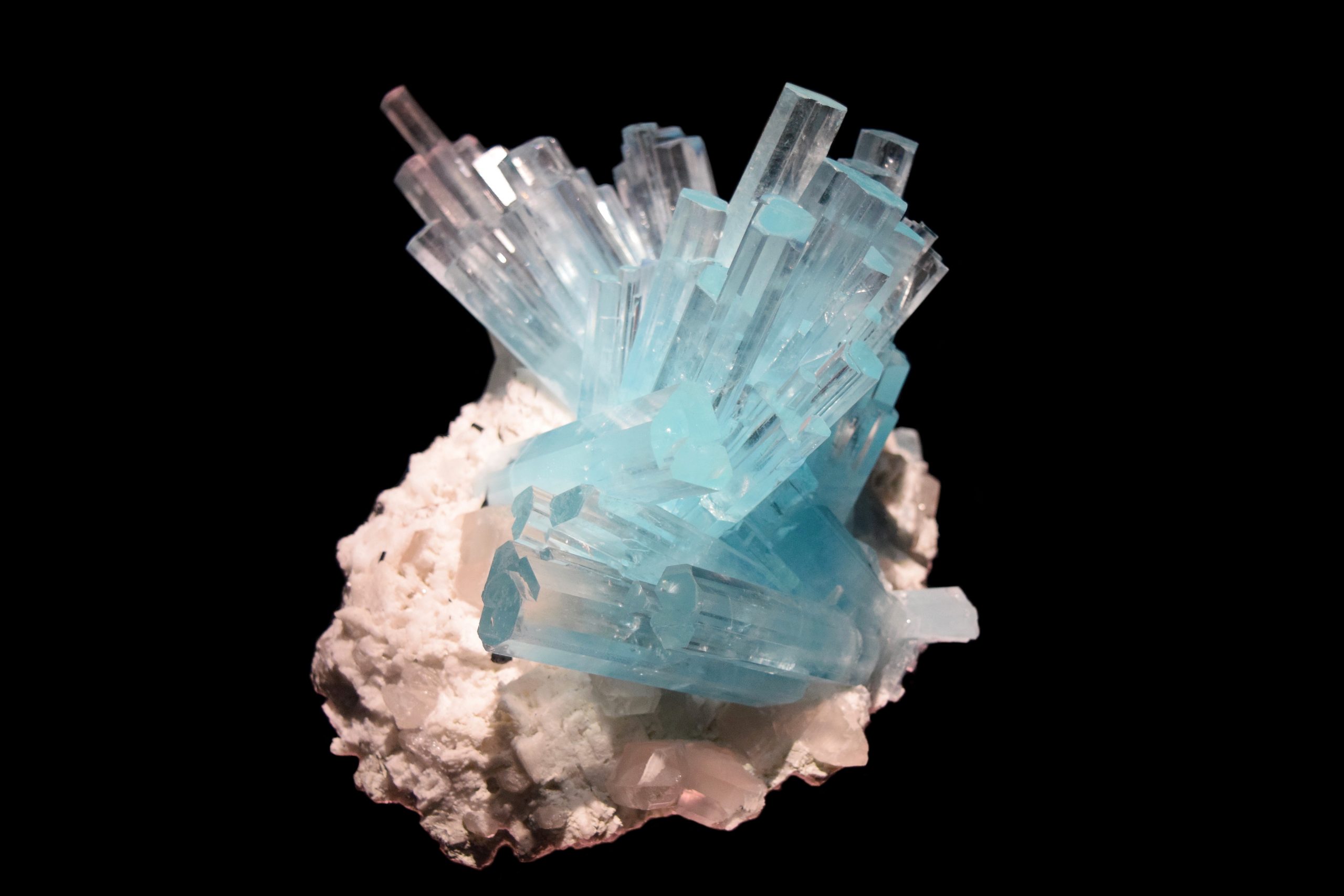 Aquamarine [Be3Al2SiO6] is the greenish-blue to the blue variety of Beryl. Aquamarine is a Beryllium aluminum silicate mineral and is in the Cyclosilicates subcategory of Silicate minerals. It forms beautiful crystals that can be quite large and totally transparent. Unlike Emerald, Aquamarine can form in stunning flawless crystals. They create some of the most beautiful mineral masterpieces. Emeralds that share an audience with collectors, are usually flawed or heavily included. Duller or greenish colored stones if heated to very high temperatures can attain a beautiful sky-blue color. Aquamarines in use with jewelry incorporate heat treatment.

Color: Greenish-blue, light blue, sky blue, deep sky-blue. Several studies show that the blue color in Aquamarines comes from trace amounts of trivalent Iron. In addition, trace amounts of Vanadium, Chromium, or Manganese can cause the sea-green to blue-green colors.

Crystal Forms: Often as perfect, six-sided hexagons, and usually in individual prismatic crystals. Also in short, stubby crystals, and occasionally in tabular crystals and flattened hexagonal plates. The bases of Beryl crystals are usually flat; pyramidal terminations are less common. Also occurs in columnar aggregates, in distorted etched crystals, and in massive form. Occasionally in druzy or platy aggregates and as bundles of thin, long crystals. Crystals may be striated lengthwise.

Firstly, Aquamarine (Beryllium aluminum silicate) is the most popular light-blue gemstone and has extensive utilization in jewelry. Likewise, rings, earrings, and bracelets will include Aquamarine. A specially important pendant stone, faceted Aquamarine is extremely popular. Subsequently, very large display gems too large for standard jewelry usage often will include facets for exclusive collectors. Cabochons cut out of less transparent stones. Quality Aquamarine crystals will hold high value by collectors in their natural form.

Localities: Despite the relatively abundant supply of fine Aquamarine, good crystals still demand a premium. Numerous localities worldwide produce outstanding specimens. Brazil is a major producer of Aquamarine, especially in the Jequitinhonha Valley in Minas Gerais, where it occurs in the areas of Araçuaí, Coronel Murta, Palmital, and Pedra Azul. Additionally, a deep blue Aquamarine comes from Medina in Minas Gerais. Other Brazilian occurrences are Guaratinga, in Bahia, where the Aquamarine forms in gemmy tower-shaped crystals; and in Mimoso do Sul, in Espírito Santo.

Above all, Pakistan undoubtedly produces the most outstanding crystals of Aquamarine, and some of these crystals can be huge gemmy giants. There are several important deposits in the northern mountains; particularly noteworthy is the Shigar Valley, Skardu District, Baltistan; and Nagar, Hunza Valley, Gilgit District.

In addition, beautiful Aquamarine crystals have been coming out of China at Mt. Xuebaoding, Pingwu, in the Sichuan Province; and from Nepal at Taplejung. Similarly, in Russia, fine specimens have come from Mursinka, Yekaterinburg, in the Ural Mountains; and at Adun-Cholon, in Nerchinsk.

Mogok, Myanmar is also an important producer, as are the Jos Plateau, Nigeria; and Marijao and Sahatany, Madagascar. A locality of special note is Erongo, Namibia, where an intensely colored Aquamarine is found that is especially treasured by collectors.

Moreover, additional information about Aquamarine and Beryl can be found at Mindat or by joining our community of mineral dealers, collectors, and enthusiasts at Rockygems.com. Join us on our Facebook, Twitter, and Instagram pages.