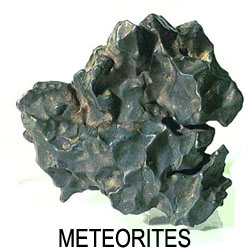 What is a Meteorite?

A meteorite is a rock from space. Most come from the asteroid belt, a region of rocky and metallic chunks orbiting the Sun between Mars and Jupiter, where no planet ever formed. A few come from the Moon or Mars, blasted off the surface of those worlds by gigantic impacts in the distant past. It may take millions of years or more for them to find their way to Earth.

How are they discovered?

Sometimes meteorites are seen falling, often after a bright fireball has exploded in the sky. They are called falls. More often they are discovered on the ground by chance and are called finds. Some climates are more friendly to meteorites than others, for example dry areas with little vegetation. High humidity and heavy vegetation makes finding them much less likely.

Do they come from meteor showers?

No. Meteor showers—like the Perseids in August or the Leonids in November—are annual events that occur when Earth travels through clouds of dust left behind by comets as they orbit the Sun. The dust particles are very tiny and always burn up high in the atmosphere. There are no known meteorites related to meteor showers.

There are three basic types of meteorites

But those types are then sub-divided in many different sub-types depending on their physical characteristics and chemical composition.

An iron meteorite may be covered with ‘thumbprints. Or it may be sharply bent and distorted like shrapnel.

A typical stony meteorite has a dark fusion crust and lighter interior. Chondrites contain iron. You may see silvery flecks in a cut chondrite. Chondrites contain chondrules, tiny spheres that are older than Earth. They are found in asteroids. No Earth rock has them.

Some of them are black because they contain carbon, and have been found to be scientifically very important.

You will need a microscope to really look inside a chondrule.

An achondrite has no chondrules, and if it doesn’t have a dark fusion crust, it may not be recognized as a meteorite. Meteorites from the Moon and Mars are achondrites.

Stony-iron meteorites are a mix of iron and rocky material, formed deep inside a large asteroid or by a violent collision. Some contain crystals of olivine in a network of iron-nickel. They are the Pallasites. And some are a jumble of melted iron and broken rock. They are Mesosiderites.

Did you find a meteorite?

It may be difficult to know. Some are obvious, but many are not. Here are some typical characteristics of meteorites to help you tell them from ‘meteorwrongs.’

• Are heavier than regular Earth rocks of the same size.

• Contain iron and are attracted to a magnet.

• If stony, are covered by a black fusion crust and may be lighter inside. The surface may show signs that it was flowing when the rock was heated in the atmosphere.

• If irons, may show signs of violent explosions like shrapnel from a bomb.

• Completely melted. They don’t land with a splash. They aren’t on fire and don’t cause fires when they hit something. They may be warm but are often very cold.

• Radioactive. You can thank Hollywood for all these misrepresentations.

Some common meteorwrongs are slag, lava, magnetite and hematite. The best way to find a rock that is different, like a meteorite, is to get to know the common local rocks in your area.

To make it official, identification by an expert and analysis by a specialized lab are required. Then your find will be submitted to the Nomenclature Committee of the Meteoritical Society, and will eventually be published in the Meteoritical Bulletin.

All meteorites sold by IMPACTIKA have been authenticated, analyzed and are published in the Meteoritical Bulletin.

For collection, research and study

Member of the IMCA – www.IMCA.cc

How to Find a store:
Go to Our Store List and type in store name in the search field and wait. (do not hit enter) or choose a category you are looking for.
Looking for a Particular Mineral or Item?
Cart
Articles and News
Additional Resources:
Stay in Contact: